Nature conservation pioneer and legend, 87 year old Dr Ian Player, passed away peacefully at midday on 30 November 2014 after a short illness. He was at home surrounded by his family.

Our personal support goes to the Player family at this time as they gather at the homestead in the Karkloof Valley of KwaZulu-Natal, South Africa. Despite physical challenges that hounded him all his life, Ian worked tirelessly until his last day, fully committed to his life’s work of nature conservation and his quest to understand the human spirit and psyche. His legacy is without parallel, his example without equal. 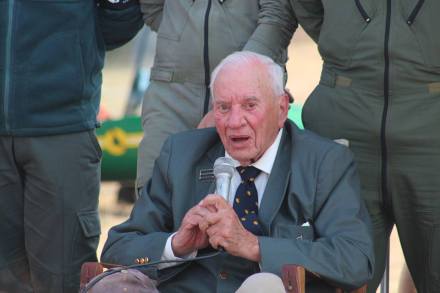 It was Dr Player’s wish to have a private family funeral service. A memorial service will be held in due course, with details forthcoming.

Educated at St. John’s College, he went on to serve in the SADF – 6th South African Armoured Division attached to the American 5th Army, in Italy 1944 – 1945.

A globally recognised conservation legend, Dr Ian Player was a pioneer, a visionary and an activist who has profoundly influenced conservation and changed the lives of countless people. He grew up in the pioneering days of nature conservation in Africa, working for months on end in the wilderness.

His sporting passion was canoeing. After initiating the Pietermaritzburg to Durban Canoe Marathon (Dusi), he went on to win the race three times. His exploits are well documented in his book Men, Rivers and Canoes.

On his return from WWII he worked underground in the gold mines before taking a position in the (then) Natal Parks Board. He rose to the rank of Chief Conservator of Zululand by the time he took early retirement, in 1974. He was made a member of the Board on three occasions, the only Parks Board staff member to do so. Later in life he also served on the Board of SanParks (SA National Parks Board).

From 1952, as Warden of the iMfolozi Game Reserve, Dr Player spearheaded two important and far-reaching initiatives. The first was Operation Rhino, in which he led the team that pioneered the methods and drugs to immobilize and translocate large mammals. The team captured and moved many of the remaining population of southern white rhino to save them from the brink of extinction. As a direct result, white rhinos now inhabit their former distribution range within many national parks and game reserves, private game farms, zoos and parks around the world.

The second initiative was Dr Player’s recognition of the value of wilderness for the human spirit and for biodiversity conservation. Professionally, this led to the designation of the iMfolozi and St. Lucia Wilderness Areas in the late 1950s — the first wilderness areas to be zoned in South Africa and on the African continent. It also fired his personal quest to understand the human psyche through dreams and drawing on the work of Swiss analyst Carl Jung, which he explored assiduously for decades with the late Sir Laurens van der Post. Dr Player was one of the founding forces for the Cape Town Centre for Applied Jungian Studies, the first such centre in Africa.

Dr Player resigned from the Natal Parks Board (NPB) to focus his energies on the wilderness movement. He continued conservation work within the NGO sector, leading to one of his most notable achievements – the founding of the globally recognised Wilderness Leadership School (WLS). The WLS was the nucleus from which many other collaborative organisations have emerged, including the World Wilderness Congress (WWC) — implemented by Vance Martin and the WILD Foundation on behalf of the Wilderness Network — held every four years in various countries throughout the world.

Despite life-long physical challenges that steadily increased with age, he nonetheless worked tirelessly on his life’s work for wild nature.

Ian Player has written many books of which White Rhino Saga and Zululand Wilderness Shadow and Soul are probably best known. His biography Into the River of Life was published towards the end of 2013.

Ian Player committed his life to conservation and, in particular, to the preservation of the rhino through his services as a consultant to many organisations sharing this common interest.

He is survived by Ann Player, his life-long wife, sons Kenneth and Amyas, daughter Jessica, and their families. His younger brother is the famous golfer, Gary Player.