The CXPress Garden Route Culinary Awards took place at beautiful Kurland Estate in The Crags, with the who’s who of the ‘hood’s food aficionados in attendance to either receive or hand over prizes. At the steer of proceedings were Francois Ferreira, who is the Principal of the Francois Ferreira Academy as well as the head of the South African Chaîne de Rôtisseurs, and Anne Hadley, local foodie supreme and better half of the late Ian Hadley, who started the awards shortly after the turn of the century to acknowledge local service and cooking excellence. 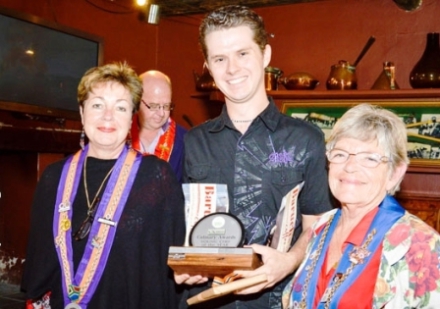 Vice Principal of the Academy  Denise Lindley Presented the trophy for Young Chef of the Year to the winner Michael Ashley of The Girls restaurant in Wilderness. Michael is also a former student at the Francois Ferreira Academy. Speaking at the event Miss Lindley pointed out what makes our students the best, “Our fulltime courses are enhanced by a range of add on subjects that give our students a very specific edge once they enter the industry. Subjects include Cake Decorating and Sugar Work, Basic IsiXhosa, Basic French, Hospitality Financial Management, Event Management, Entrepreneurship, Business & Social Etiquette, and short courses in Brandy, Wine and Port appreciation.

“We are proud of our training achievements, and many of our previous students have become leaders themselves in the industry, both locally and internationally. We credit our success to the individual and hands on training in groups that do not exceed 20 students at one time” she said.

At the ceremony Kurland chef Leon Coetzee and his crew laid on canapés to die for after the official handover of Top 20 and Legends (those eateries consistently making the Top 20 for three years-plus) certificates, Best Of Plaques and the ultimate prizes of Best Server, Best Wine Steward, Best Young Chef, Best Chef and Special Achiever of 2014 trophies.

Representatives of Plett’s budding wine route ensured that no parched throat went unnoticed and the Kurland team attended to guests’ every other need, showing why they were worthy recipients of this year’s Best Service award.

Best New Kids on the Block: The Bench & Calandra (shared – both in George)

Young Chef of the Year: Michael Ashley (The Girls)