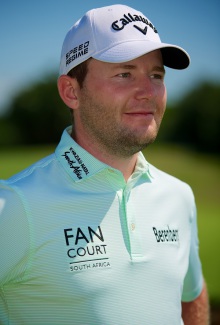 Saturday at the Alfred Dunhill Championship was a tough affair and Branden Grace saw his lead dwindle to one shot, but the 26-year-old remained in front at Leopard Creek Country Club.

“I’m one ahead and in the position I want to be in. I’m still in good form, hitting the ball nicely and giving myself chances. I made some nice putts and today was just how golf can go sometimes,” he said.

Golf fickleness certainly affected Grace during the third round and carded a level-par 72 that included four birdies and four bogeys. By the close of play the four-time European Tour winner held pole position on 16-under-par.

“I’ve only had good experiences going into a final round and leading. I’m looking forward to tomorrow and taking in those positive vibes. It’s the last round of the season, so let’s try to finish it with a bang,” he said.

Denmark’s Lucas Bjerregaard had a dream 18 at Leopard Creek and shot 66 to rise into second place on 15-under-par. The 23-year-old got his round going with an eagle three at the 13th, which is the signature hole of the course.

He has finished in the top five in his last two starts on the European Tour and burst into contention on Saturday by shooting the low round of the day.

A further stroke off the pace was last week’s Nedbank Golf Challenge winner Danny Willett, who shot 33 on the back nine to total 15-under for the tournament.

Italy’s Francesco Molinari brought up fourth place on 12-under, while top-ranked Challenge Tour graduate Andrew Johnston was fifth a further shot off the pace.

Louis Oosthuizen made it to 10-under with an eagle at the 18th that was the result of a superb seven-iron approach that he stuck to five feet from the cup.