KRUGERSDORP, 14 December 2014 – Rosswell Sinclair and Albert Venter will lead the Gauteng North into battle against Ekurhuleni in the first round of the A-Division, while recently crowned Joburg Junior Open champion Keagan Thomas will lead a strong KwaZulu-Natal team into the B-Division promotion war at the South African Junior Inter-Provincial at Krugersdorp Golf Club. 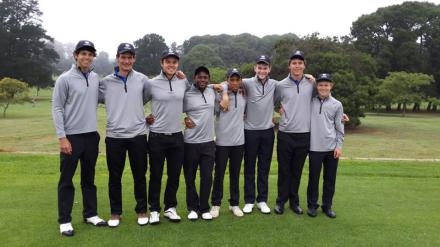 It might be Sinclair and Venter’s toughest match of the week, as the duo will face reigning Nomads SA Boys U-19 Stroke Play and Match champions, Tristen Strydom and Paul Boshoff, in the opening gambit.

Sinclair comes into the championship on the back of a tie for fourth at the Joburg Junior Open at Royal Johannesburg & Kensington on Friday, while Venter showed some good form at the tough East Course to tie for 14th.

The final practice could be to their advantage, though, as the Ekurhuleni pair elected not to play the final stroke play event of the junior season.

Stefan Wears-Taylor and Estiaan Conradie will go up against Kyle McClatchie and Jason Froneman, while JP Cooper and Nicholaus Frade will combine against Dylan Mostert and Sentanio Minnie.

In the final pairing, Cliffie Thompson – a four-time winner this season, will partner with Ofenste Nukeri against Ruhan van Dijk and Chris van Tonder.

David Meyers and Marco Steyn – who combined so brilliantly for the victorious Central Gauteng team at the Premier SA Inter-Provincial, sponsored by Tempest – will hope to help the junior side set course for a double triumph this week.

The team faces off against some big guns from Southern Cape in the first round, including Jovan Rebula, twins Aidan and Caylum Boon.

Top juniors Luke Trocado, Altin van der Merwe and Luca Filippi are in the line-up for Western Province, who will take on Limpopo in round one.

The 18-year-old Pietermaritzburg golfer hopes to ride that confidence to further success when he combines with Gregory Mckay against Philip Niemand and Johann Burke from North West Province in the opening Foursomes.

Luke Mayo, who held a share of the first round lead in the Joburg Junior Open and eventually shared second, will team up with Matt Saulez against Aldre Terblamce and Herman Anderson.

The rest of the teams fighting for promotion include Eastern Province, Border, Boland, Free State and Mpumalanga.