Some of the country’s favourite entertainers will be in Port Elizabeth on Saturday, March 7, for the first Algoa FM “Algoa Live” concert.

“As the leading music station in the Eastern Cape and Garden Route we see the need – and the opportunity – to give fans the chance to see their favourite South African artists live on stage,” says Dave Tiltmann, managing director of Algoa FM.

The seven hour concert is being staged in Prince Alfred Park at the Nelson Mandela Bay Stadium.

“It is seldom that you will find so many national acts of this calibre appearing in a single concert. This is a real coup for Port Elizabeth,” says Tiltmann.

There are plans to stage the concert annually.  We know it will grow to become a popular sought-after event both locally and nationally”.

Concert tickets will be available from 6am on Thursday, 18 December and are being sold at R150 for adults and R80 for children (under 18).

Tickets will be available online via Ticketpros on www.ticketpros.co.za  or purchased at participating PostNet outlets within the station’s broadcast area; including Beacon Bay, Vincent, Grahamstown, Uitenhage , in Port Elizabeth at Metlife Plaza, Moffett on Main, PE Waterfront Express, Sunridge Village, The Acres, The Bridge and Walmer.

Visit www.algoafm.co.za for further detail on the concert. 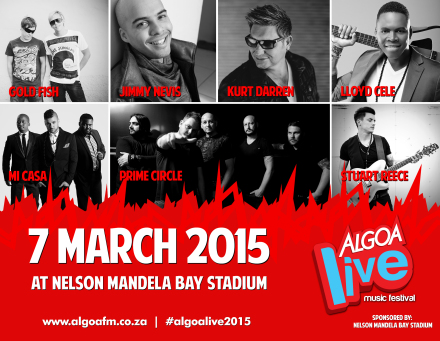