The first stage of the 27th Trans Agulhas Inflatable Boat Challenge was won yesterday by the modified class team of Dave Barnett and Tjaart Oosthuizen (Infanta/Yamaha) in a time of 02:50:40. 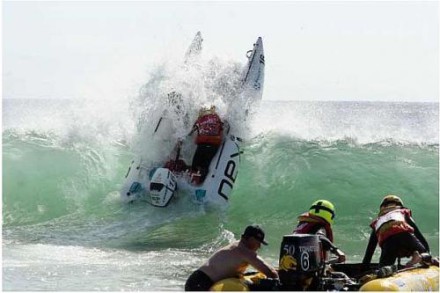 The stage, which took place in rainy conditions, was dominated by teams participating in the modified class. In this class, the teams are allowed to modify their engines for better performance.

The second team to make it to the finish in Mossel Bay was the team of Wade Ball and Bobby Shaw (Landrover).

The first professional class over the finish line was Team Nulandis (Stefan Lindique and Tony Ingram) in overall fifth position, five minutes after the winning boat.

Thirty-four teams started the stage in Plettenberg Bay and five teams did not finish due to technical problems.

Today’s stage spanned a distance of 188.5km. Today the riders will be racing between Mossel Bay and Stilbaai and the first teams are expected to reach the checkered flag at around 09:26.

Beach stops are at Vleesbaai and Gourits River Mouth. For an ETA of the boats at the beach stops, go to www.trans-agulhas.com.