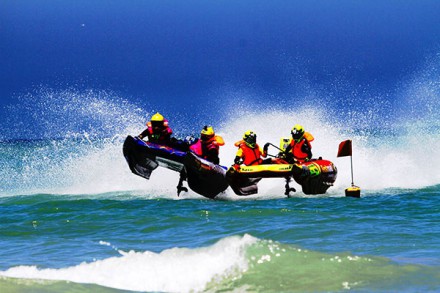 Barnett and Oosthuizen also won the first stage, but could not finish the second due to a burst bladder sack. Their race strategy today was to try and make up as much time as possible in this stage, which stretched from Stilbaai to Struisbaai. They managed to complete the 181km stage in a time of 02:30:24, 34 seconds before Team Imperial Cargo with Wimpie Ackermann as pilot and Whitey Louw as co-pilot.

The team of Nulandis/Pomula (Stefan Lindique and Tony Ingram) was third on the beach in Struisbaai.

Two stages will be contested tomorrow. In stage one the teams have to race from Struisbaai to Uilkraalsmond. There will be two beach stops, at Die Damme and Pearly Beach. The first boats should be at Uilkraalsmond at approximately 09:28.

The fifth stage will be contested later the afternoon and stretches from Uilkraalsmond to Gansbaai.