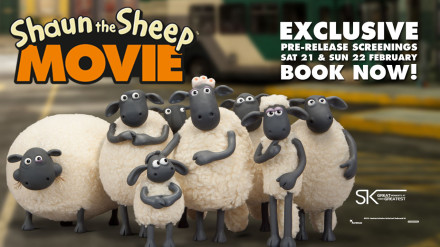 “Aardman’s latest stop-motion animated feature is a rarity: a film aimed at very young kids that will delight adults, too.” – Independent

The delightful animated film, Shaun the Sheep Movie, will receive some special attention before its national release on 27 February. The film will have some pre-screenings this coming weekend, 21 and 22 February, for the first three show times at Ster-Kinekor cinemas.

Especially for the younger audience, the film is based on the perennial favourite TV series of the same name, which itself was a spin-off from Aardman Animation’s popular Wallace & Gromit series. This stop-frame animated movie follows Shaun the Sheep and his flock into the big city where they head en masse to rescue their farmer, who was forced by Shaun’s mischief to leave the farm.

The film is directed by Mark Burton and Richard Starzak, and is produced by David Sproxton, Julie Lockhart, Paul Kewley and Peter Lord.

“These sheep defy the stereotype. They are fiercely individual and resourceful. It’s the humans who look like conformists” – Guardian

Don’t miss out on the chance of seeing this fun film before its national release.  All Ster-Kinekor cinemas are now fitted with the latest digital projection technology, ensuring that you ‘see it best’ and ‘see it first’, as you enjoy ‘Great Moments at their Greatest’.

For more information about show times, and to book your tickets, visit: www.sterkinekor.com or sterkinekor.mobi. You can also secure your seats by downloading the Ster-Kinekor App on your Nokia, Samsung Android, iPhone and Blackberry smart phone, to book from your mobile. To find out what other exciting promotions Ster-Kinekor has on offer, follow @sterkinekor on Twitter or Facebook at Ster-Kinekor Theatres. For queries, call Ticketline on 0861-MOVIES (668 437).

View the trailer for Shaun the Sheep Movie here