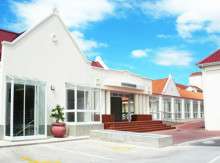 George welcomed the National Council of Provinces (NCOP) to the Eden District Municipality for its week-long pre-visit for the Taking Parliament to the People (TPTTP) programme.

“The purpose of this pre-visit is to gather as much information as possible to ensure that NCOP delegates have sufficient knowledge about the issues in all seven municipalities,” Ms Dikgale said.

Mr Steven Erasmus, George Acting Municipal Manager, explained that George’s service delivery record is among the best in the country and also said: “George is the first non-metro in the country where disabled people are accommodated and have access to public mini-buses.

We have a R2.5bn pipeline project and this is just one of the job creation initiatives that will improve the lives of the people of George Municipality,” Mr Erasmus said.

Oudtshoorn Municipal Manager Mr Llewellyn Coetzee told the NCOP that Outshoorn had laid a good foundation through building business initiatives, improving tourism and regenerating poor areas, and placing a strong focus on black economic empowerment and small, medium and micro enterprises. However, he highlighted some challenges.

“In order for us to respond to the National Development Plan (NDP) 2030 vision, we have to do something for the 9 000 people living below the poverty line in our municipality. We also have to bring unemployment way below the 35% it is at currently,” Mr Coetzee said.

He was excited to share with the NCOP some of the stories about young people volunteering in hospitals and schools.

“We are happy that our young people are taking charge of their lives. This puts Oudtshoorn Municipality in a good position to be a training town, especially for rural areas,” he said.

Mossel Bay Municipal Manager Dr Michele Gratz also had some good stories to tell. “Social responsibility is a high priority for this municipality and I am happy to tell you that President Zuma in his State of the Nation Address mentioned that Mossel Bay is a well-managed municipality,” Dr Gratz said.

“However big our challenges, we will stop at nothing to ensure that Mossel Bay remains a financially sound municipality and that we spend our operational budget sufficiently,” Dr Gratz said.

“Our role is not only to conduct audits for municipalities, but also to provide support and an advisory role in areas such as human resources and financial management training. We encourage municipalities to have town planners to determine the cost of service delivery, so they can manage their finances effectively,” Mr Mullagie said.

Ms Dikhale apologised to those municipalities that were unable to make their presentations due to lack of time and told them that there would be space in the week for them to share the issues they want to raise.