WESBANK and Evergreens each moved a big step closer to the knockout stages while Pretoria Police showed their title credentials in a dramatic third round of Cell C Community Cup action characterised once again by large crowds and nailbiting results across the country. 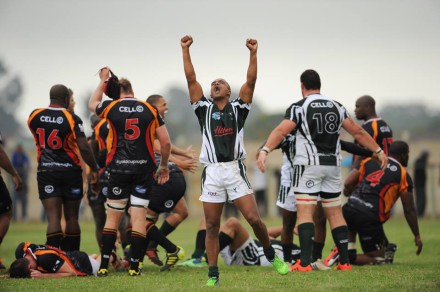 Seven of Saturday’s eight Pool matches were only decided in the dying minutes, with six of the games decided by six points or less as a number of teams kept their hopes alive of qualifying for the Easter play-offs, which takes place in Rustenburg from 2-6 April with all 12 matches live on SuperSport.

In Pool A, two tries from wing Dumisani Matyeshana saw defending champions Rustenburg Impala hold out for a hard-fought 28-22 victory over Kempston Old Selbornians in East London. In the Pool’s other match, East Rand Cranes broke their duck when they came back from 11 points down to beat Don’s Pawn Shop PE Police 25-22, with replacement Marthinus du Plessis diving over in the second minute of injury time to seal a dramatic victory.

The results see Impala top a congested Pool A with nine points ahead of their derby against bogey team Springs this weekend, while PE Police must beat Durbanville-Bellville at the Nelson Mandela Bay Stadium on Saturday to avoid being knocked out.

There was just as much drama in Pool B, where a 79th-minute penalty by Dillon Laubscher gave Pretoria Police a 20-19 home win over Jonsson College Rovers in a match played in a Highveld thunderstorm. In the Pool’s other match, fullback Christopher Juries, wing Marceau Alberts and replacement Tshepo Mooki each scored two tries apiece as Raiders kept their qualification hopes alive with a 50-27 win over BB Truck & Tractor Noordelikes in Polokwane.

The results see Police take a five-point lead at the top of the Pool, with the three-horse qualifying race between Bobbies, Raiders and College Rovers set to be decided in the final two rounds at the Bill Jardine Stadium where Raiders host Police and Rovers in Rounds 4 and 5.

In Pool C, there was late fireworks in Worcester as a 79th-minute try by replacement Francois Esterhuyzen gave Hamiltons a 41-35 victory over One Logix United Bulk Villagers Worcester in the first meeting of these two teams in 132 years. And in Pacaltsdorp, Vaseline Wanderers scored four tries and looked to have done enough for a 20-19 win against Evergreens, only for the home side, spurred on by a 3,000-strong crowd, to take the spoils with a late try to flyhalf Leegan Moos.

The results make Pool C too close to call. Hamiltons lead by four points over Evergreens, who have a game in hand and must travel to Cape Town in the final round, while Wanderers’ five points gained on the road ahead of their two home games mean that they can still leapfrog Evergreens and Worcester and into play-off contention.

In Pool D, Wesbank came from behind to beat SA Home Loans Durban Collegians 34-20 in front of 2,000 fanatical fans in Malmesbury to move into second place behind Gap Management Despatch, who were made to work all the way for a nailbiting 29-26 victory in Emalahleni over Shumba Ferros.

The results see Despatch and Wesbank in the pound seats going into the final two rounds, with the Boland side standing a good chance of qualifying should they beat bottom-placed J&F Reclaiming Rovers Welkom on Saturday. Collegians are not yet out of the race, although they will most likely have to beat Despatch on the road in the final match of the pool stages to advance.