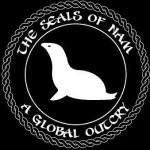 Garden Route (South Africa) – Compassionate individuals will rise up in protest against the commercial seal hunts, most notably those of Canada and Namibia, on 20 March 2015 from 13:00 at Unity Park, George.

Between these two countries, a quota of half a million seals is set to be brutally slaughtered each year.

Carcasses are left to rot out on the ice floes and penises get shipped to the east to make ineffective sex tonics. It is a crime against nature and an insult to humanity.

Unlike the seals targeted by the commercial Canadian seal massacre, the Namibian seal has much greater locomotive abilities. These seals will attempt to run away and can run almost as fast as a man, even over rough terrain. When they are being beaten to death, they take evasive action. Several blows are typically landed before the animal is rendered dead or unconscious. Since the EU and Russia have banned the import of Canadian skins, the Namibian seal “cull” has become the largest slaughter of marine mammals on earth. Namibia is also the only country in the world that allows for nursing pups to be slaughtered. It is for these reasons that the Namibian hunt is considered the most brutal of all seal hunts.

Cape Fur seals are a protected species. They are listed on Appendix II of CITES (Convention on International Trade in Endangered Species) They have lost more than 90% of preferred habitat and have suffered several major mass die offs in 16 years, the last of which wiped out 1/3rd of total population. This has been confirmed by Namibia’s own seal biologist Dr JP Roux. Global warming and pollution are major threats to these animals.

In spite of this, without any scientific evidence to rely on, the government of Namibia slaughters 86 000 of these animals each year under the false pretext of a “cull” necessary to protect fish stocks. In truth, the slaughter is having the exact opposite of the intended effect and instead of reducing numbers, the seals breed faster and the result places massive strain on the fragile Benguela Current Large Marine Ecosystem. Let us explain.

The seal hunt quota is made up as follows. 80 000 pups are beaten to death for their fur pelts. 6 000 adult bull seals are shot at point blank range for their genitals. Because the genitals of the male pups can also be sold, they are targeted more so than the females. At the end of the seal hunt season there arise an unnatural situation where there are proportionately many more females than males in the colony. One bull can impregnate up to 40 females. So the population grows faster. This has been proven and is evidenced by using statistics provided by the governments of South Africa and Namibia.

A full list of petitions can be found here http://www.thesealsofnam.org/petitions/

The good news is that the Seals of Nam can report great progress in our fight against commercial seal hunt.

The latest celebrity support comes from George Lopez, American actor/comedian.  He is but one example of many celebrities who have come out publicly in support of our campaign against the Namibian seal hunt. This is fantastic for us. His one simple tweet asking what people can do to help fight the seal hunt generated massive amounts of awareness. Our website hits spiked through the roof shortly after he tweeted as more people learned of the horrors that are happening in Namibia. Pledges to boycott the country were fulfilled, petitions were signed and letters to government were sent off in their thousands. With over 2 million Twitter followers (equal to Namibia’s entire human population) there are now thousands, if not hundreds of thousands of people questioning the ethics of a Namibian holiday. The knock on effect is having such a hugely negative impact on the country’s tourism it is deplorable. Almost daily we get messages either tweeted to us or posted on our social media pages of people cancelling their planned holiday to Namibia due to the barbarity of the seal slaughter. This is to be expected. People do not wish to see their hard earned holiday money being used to prop up a racket that profiteers from obscene cruelty.

We do not force them to boycott Namibia. We simply help them make the decision through our campaign of exposing the stench of the seal massacre. Our success over the last five years has actually been quite remarkable. Our support base, which covers all the corners of the earth, has swelled exponentially. Our reach has been absolutely phenomenal, and the reason is that we are very lucky to have passionate, dedicated and loyal followers. Our success is entirely up to our supporters. The key element behind our strategy is in our motto, “A global outcry”.  We are not interested in who you are or where you are from or what organization you belong to. We are interested in your support for these animals.

They are a protected species and are listed as under threat on Appendix II of CITES. They need our help. So are you with us or not? This concept has worked beautifully and we have had spectacular collaborations with several leading role players including Sea Shepherd, IFAW and the International Anti Fur Coalition, to name but a few. As for what we will be focusing on for the future, one of the key aspects is the shutting down of the remaining available markets. In 2013, we were part of a coalition of organizations, scientists and welfare bodies who approached the SA government to be the first African nation to join the EU in banning the import of seal skins and produce. If we succeed here it will be a nail in the coffin for the Namibian hunt. We are also pressing for correct labelling in terms of origin of Omega 3 oils. Currently there are untold heath supplements available in SA containing Omega 3 oils. None of these stipulate if the oils were derived from the seal hunt or if they were extracted from fish. Makes you think?

To join the event on 20 March, please join on Facebook.