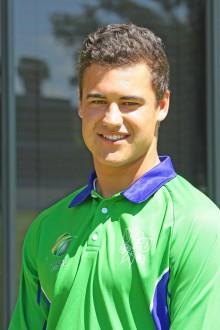 It is with great pleasure to confirm that Hanno Kotze (from South Western Districts) who represented the Warriors at the recent Cricket South Africa Franchise Academies week that was hosted in Potchefstroom the past week was included in the SA Colts (u/23) team.  The SA Colts team will participate in the CSA Future Cup tournament in Kimberley over the period 7-9 April 2015.