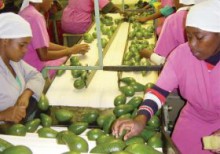 The new South African avocado season has started with small shipments which are due to arrive in Europe this week.

South Africa’s avocado exports are likely to be down this year, following a record crop in the previous season.

The drop in volumes is attributed to an off-season which normally happens the year after a bumper harvest.

“It is a drop of around 10 per cent,” says Donkin. “This is probably less of a percentage drop in an off-season than one would normally expect and is due mainly to new orchards coming into production.”

Only two containers will arrive this week, but according to Donkin these will increase considerably from next week onwards.

The new orchards he referred to are mostly located in the heartland of South Africa’s avocado industry, the region around Tzaneen, while new plantings have also occurred in Mpumalanga and KwaZulu-Natal. Donkin says there is also an increase in production in the Southern Cape region, but the fruit from this region is primarily aimed at supplying the late South African market.

“Traditionally avocados are imported during the period from November to February and growers in the Southern Cape will supply during this period, which will eventually mean that our growers can supply the local market for 12 months of the year.”

Mr Donkin notes that the trend to increase production of dark skin Hass in continuing. “This year 59 per cent of our exports are expected to be Hass and 41 per cent green skin varieties.”

While the UK and Europe remain South Africa’s most important marketing regions, the local industry is also focusing its attention of gaining access to China. Donkin says there is some progress in negotiations between South Africa and China, but the process is a very slow one.

“Presently the focus from the South African point of view is to get access for pears, where after it will be the turn of avocados,” he explains.

In this respect Subtrop is working within Fruit South Africa, which last year led a delegation to the China Fruit and Vegetable Fair in Beijing. Bonnie Buthelezi, market development manager at Subtrop, says South Africa had an opportunity to meet with Ge Zhirong, president of China Entry-Exit Inspection and Quarantine and Wu Hao, the deputy director Bio Security Division who received the delegation with warm hospitality.

“The outcome of the meeting promised positive results for Fruit SA on protocols and market access for some of the fruit types that are currently not exported to China,” he adds.