The new Discovery Sport is every bit a Land Rover, and to ensure that it lives up to the company’s rigorous standards it underwent a thorough series of tests during development. 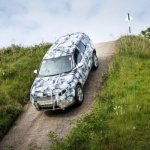 Highlights from testing include a total driven distance of 1.2-million kilometres – more than three times the distance between planet Earth and the nearest orbiting satellite, the moon. Discovery Sport was also tested at extreme altitude, and it ran reliably at 4 000 metres above sea level, where the air is 40% thinner than it is at the coast.

To test its class-leading off-road capabilities, made possible by short overhangs and Terrain Response®, Discovery Sport was driven up 40º inclines, and down even steeper, 45º descents – gradients more extreme than those faced by Olympic downhill skiers.

In total, more than 181 prototype vehicles were used to complete more than 11 720 unique tests, ensuring that the Discovery Sport is as durable and capable as all other members of the Discovery family.