20 April 2015 – The South African team were deflated after coming up painfully short in the 2015 Africa Zone VI Golf Championship, but the defending champions were full of praise for host union Uganda, who swept to victory at Kampala Golf Club on Friday. 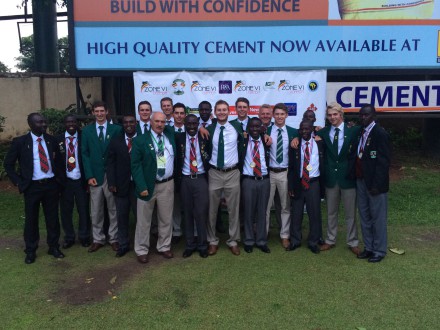 The home favourites edged out South Africa by one point to triumph on 18.5, terminating the country’s dominance in the prestigious teams championship since 1995.

South Africa and Uganda finished the first day in a tie on 6.5 points and the two teams were still deadlocked after collected six points each in the second day.

Uganda finished in front after earning six points on the final day against the five South Africa collected.

The final day was not without drama, though, as South Africa’s Teaghan Gauche and Paul Ndeilenga from Namibia were disqualified from their Singles matches for arriving late on the first tee.

“Both players boarded the reserved transport at the official hotel well before its scheduled departure time of 08h00. However, the bus driver insisted on waiting for more players and the bus only departed the hotel at 08h22.

“For security and safety reasons, the players were instructed to use the official schedule transport only and this was impressed on the players throughout the tournament.

“Teaghan was nearly at the tee when he was intercepted by a member of the Tournament Organising Committee and the tournament referee Tony Rocke, and informed of his disqualification.

“According to the official course clock, Teaghan was still in time with two minutes to spare and would only have lost the first hole.

“During the second day, I personally drew the referee’s attention to the course clock, which was running five minutes slow and requested that they either fix the time or cover the clock, as it had already caused some confusion. This was not done.

“We appealed the disqualification immediately, but was informed by Rocke that the stop watch around his neck was the official course time. He subsequently deemed Teaghan’s arrival as late and the decision was final, irrespective of extenuating circumstances which is covered in the Rules of Golf.

“We urgently appealed for a meeting with the Tournament Organising Committee and the tournament referee, but the referee was unavailable as he was on starting duty. We stated our case, but the appeal was not upheld.

“We were naturally very disappointed with this, however, we respected Tournament Organising Committee’s final decision.

“The Uganda team deserve all the credit due to them for a wonderful performance in front of their home crowd. They played with extraordinary determination and vigour and we were impressed with their fighting spirit.

“It was a tremendous victory for Uganda and for golf development in Africa and we sincerely congratulate the team on their achievement.”

National coach Llewellyn van Leeuwen commended both the winners and the runners-up for their fantastic performances and the spirit with which they went head-to-head each day.

“It was really a pleasure to welcome new blood with fantastic attitudes on to the team.

“In retrospect, the outcome could possibly have been in our favour had I played Jason against Zimbabwe and Aubrey against Malawi, but irrespective of the final result, Uganda has to be commended for their victory.

“They were unmatched in determination and their superior skills on the green and they tapped into the crowd support to deliver a champions’ performance this week.”

Written and released by Lali Stander on behalf of the South African Golf Association.