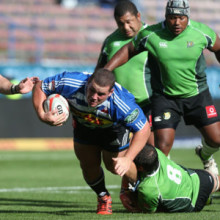 DHL Western Province cemented their place at the top of the Vodacom Cup South Section log with a bonus-point 27-19 (halftime 14-9) victory over the SWD Eagles at DHL Newlands in Cape Town on Saturday to set up a quarterfinal date with the Leopards XV next Friday.

Western Cape rugby welcomed the return of Jaco Taute, who capped his afternoon off with a try on his return from injury but it was flanker Tapiwa Tsomondo who grabbed the limelight with a brace of tries as the men from Cape Town made sure of a home quarterfinal and potential home semifinal should they overcome the Leopards next week.

The Eagles began the match strongly and were awarded a penalty after just three minutes, which flyhalf Gerrit Smith converted. But Tsomondo did not wait long to get his name on the score sheet with a try four minutes later. Robert du Preez converted to hand the hosts a 7-3 lead.

Eagles fullback Elric van Vuuren reduced the deficit to just a single point with his first penalty attempt with just eight minutes left of the first half. But Province replied in explosive fashion as Taute burst through the Eagles defence to score on his comeback. Du Preez converted the try to hand the hosts a comfortable 14-6 lead.

Van Vuuren would have the last say of the first stanza when, on the stroke of halftime, the sturdy and dependable fullback slotted a good penalty as the sides left the field with just five points separating them.

Western Province knew that their place at the summit of the South Section was in jeopardy should they come unstuck against the Eagles and the GWK Griquas overcame the Toyota Free State XV but Tshotsho Mbovane used this knowledge as motivation as he crossed the line for his second try of the season. Flyhalf du Preez missed the extra points as Province extended their lead to 10 points.

Van Vuuren had the chance to reduce the deficit to seven points but missed his penalty attempt. The missed chance became really evident as Province capitalised on some poor defending by the visitors as Tsomodo went over for his second try.

Du Preez, who is normally an assured striker of the ball, missed his target again as the hosts opened up a handy 15 point lead which meant the visitors would have to score three times.

But with 12 minutes left on the stadium clock, utility back Leighton Eksteen scored the only try for SWD, which Van Vuuren converted to reduce the deficit to just eight points.

Van Vuuren kept the home fans on the edge of their seats when he slotted his third penalty attempt six minutes from time. As the match entered the final five minutes and the Eagles pushing for a fairytale comeback and the scoreline reading 24-19, WP were defending with all their might and looking a little nervous.

But Province made sure of the victory as Jean-Luc du Plessis slotted a long-range penalty to seal the win and deny the Eagles a point for losing by seven or less.