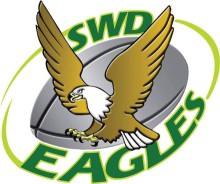 The Golden Lions overturned a 14-10 halftime deficit to book a place in the semifinal of the Vodacom Cup, courtesy of a 29-21 victory over the visiting SWD Eagles at Emirates Airline Park, Johannesburg on Saturday afternoon.

The hosts had raced into a 10-0 lead courtesy of a try by outside-centre Jacques Nel and a conversion and drop goal by flyhalf Marnitz Boshoff.

The drop goal had been taken with the referee playing advantage after SWD tighthead prop Ashley Buys had tackled Lions scrumhalf late and without any arms.

Despite being down to 14 men the Eagles rallied and flyhalf Martin du Toit scored courtesy of some fine attacking play. Fullback Elric van Vuuren slotted the conversion and the visitors were on the board. A sweeping move saw outside-centre Kirsten Heyns dive over after he had run a superb support line to collect a pass from his associate in the centres, Luzuko Vulindlu. It had been an awesome chip and gather from Vulindlu that had started the move. Van Vuuren added the extras and the visitors had a 14-10 lead, which they took into the break.

After the break the Eagles started well but it was some quick thinking by inside-centre Stokkies Hanekom that gave the Lions the lead. He took a penalty quickly and forced his way over the line.

Boshoff added the conversion and also a subsequent penalty to make it 20-14 after 47 minutes. The match continued to see-saw and Heyns intercepted an attempted skip pass from Boshoff to Hanekom and ran more than fifty metres to dive over under the posts. Van Vuuren kicked over his third conversion and the Eagles led 21-10.

Boshoff kicked two penalties in the space of five minutes to give his team a slight buffer going into the final quarter. He made the game safe with his fourth penalty before a yellow card for replacement Jean-Pierre Du Preez reduced the Lions for the remainder of the match.

Replacement Ruan Ackermann, son of Emirates Lions head coach Johan Ackerman, then made two massive contributions for his team. First he made a vital turnover for his team and then a colossal tackle stopped all the momentum the Eagles had gained.

The Lions will have to sort out their scrum ahead of the semifinal meeting next week, but look a good bet to progress to the finals if they can continue their current form.