DHL Western Province centre EW Viljoen will earn a first starting berth for the Junior Springboks against Australia on Wednesday evening in the World Rugby Under-20 Championship Pool B decider in Calvisano, Italy. 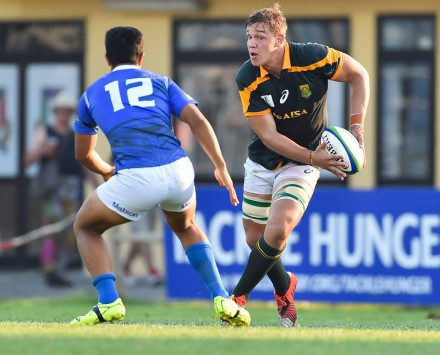 He replaces Vodacom Blue Bulls centre JT Jackson, who played in the previous Championship outings against Italy and Samoa. Jackson drops out of the match-23.

Viljoen, who will anchor the midfield with provincial partner Daniel du Plessis, is one of two backline changes to the team that faced Samoa.

His WP team-mate Khanyo Ngcukana, who played against Italy in the opening match, reclaims his place in the starting-15 in place of Grant Hermanus on the right wing.

WP flank Jacques Vermeulen, who started four matches for the Junior Boks in New Zealand last year and who came off the bench last Saturday, will start in the No 6 jersey. He switches places with Dan du Preez, who has been named among the replacements.

The South Africans will round off their preparations on Tuesday evening for this important fixture.

Dawie Theron, the Junior Springbok coach, said his team is well-prepared for the game.

“We have picked a very competitive side to face the quality Australian outfit. They showed with their two wins against Samoa and Italy that they are a huge threat, especially with the ball in hand, so we will have to work hard to counter their strong points,” said Theron.

The big South Africa Under-20 pack have been in impressive form at the tournament so far and Theron expects another good display from his forward unit.

“Our forwards are showing good form and the key for us will be to keep our momentum, reduce the number of errors and to create more opportunities for our backs,” said Theron.

The match starts at 20h30 and will be televised live on SuperSport.

The Junior Springbok team to face Australia Under-20 in Calvisano is: