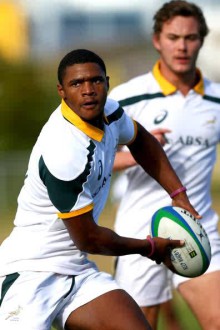 Cape Town – Junior Springbok captain Hanro Liebenberg on Monday emphasised the need for a better all-round performance when the South Africans face Australia in a vital World Rugby Under-20 Championship pool B fixture in Calvisano in Italy.

South Africa lead their pool following bonus-point wins over Italy and Samoa. The Baby Bok skipper and No 8 said his team was well aware of the important nature of Wednesday’s Australian clash.

“We see this as a knock-out match, a must win game for us and we will approach it as if it’s a quarterfinal. Only a single point separate us from Australia and we want to win so that we can progress to semi-finals,” explained Liebenberg.

The SA Under-20 skipper agrees that the team’s powerful forwards have dominated the two previous matches, but expressed a desire for a more all-round performance against the astute Australians.

“Australia is a quality side and will definitely pose a different challenge compared to Samoa or Italy. Our forwards will have to stamp their authority on the match and provide the platform for our backs to be more involved.

“Our backline wants to see more ball going out wide and they showed in Argentina and here in Italy that they can strike very well when we they are in attacking positions,” added Liebenberg

Since arriving in Italy almost two weeks ago, the team have experience extremely hot and humid conditions, to the extent that tournament organisers agree to two water breaks in the previous round of matches as a method of give the players some relief from the sizzling hot playing conditions.

The Baby Boks’ management have adjusted the team’s daily training schedule by introducing a daily gym and recovery session at mid-morning followed by a single training session, usually during early evening, when temperatures are still in the high 20 degrees.

Coach Dawie Theron will name his match-23 on Tuesday. They will complete their match preparations with the customary captain’s run.

The match kicks off at 20:30 and will be televised live on SuperSport while World Rugby will also stream all the action live on the Internet.