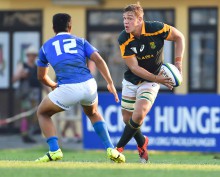 Cape Town – The Junior Springboks are the bronze medal winners of the 2015 World Rugby Under-20 Championship after beating France 31-18 on Saturday in Cremona, Italy.

The South Africans were in command in the second half and led 28-8 at halftime thanks to four converted tries. France replied with a penalty and a try.

After the break the young French, playing against a stiff breeze, managed to score two more unconverted tries, while the Junior Boks were only able to add a penalty to their tally.

Dawie Theron, the Junior Boks coach, afterwards his side made the best of their opportunities in the first half but they struggled to find their rhythm after halftime.

“We showed good composure to score those tries in the first half after France had led 8-0. We couldn’t find our rhythm and momentum in the second half and the French did well to put us under pressure.

“I’m glad we were able to finish the tournament with a win,” said Theron.

French No 10 Lucas Meret scored the first points of the match when he slotted over a close range penalty after the South Africans held onto the ball. Three minutes later right wing Arthur Bonneval dived over in the right hand corner to put his side 8-0 ahead.

In the 20th minute right wing Malcolm Jaer was held up when he wriggled his way over the line. South Africa scored their second try through powerful lock Jason Jenkins less than a minute later when he rounded off a slick forward move following successful lineout. The Junior Boks were now first the first time in the lead at 14-8.

They were now in control of the forward exchanges and scored a third time when flanker Dan du Preez stretched over the try line as the South Africans piled on the pressure.

Thomson kicked his third conversion to put the Junior Boks 21-8 in the lead.

Du Preez scored a second try on the stroke of halftime and with Thomson again hitting the target with the easy conversion, the Junior Boks were able to enjoy halftime with a comfortable 28-8 lead.

However, the French made a good start to the second half and they were rewarded with their second try just two minutes into the restart when substitute lock Julien Delannoy scored in the corner to reduce the SA lead to 28-13.

Barely two minutes later French left wing Lucas Blanc collected a clever kick over the defence to dot down in the corner. The two quick tries reduced the SA lead to 28-18, with France showing plenty of intent to run the ball.

Thomson kicked his first penalty in the 68th minute to give the Junior Boks a comfortable 31-18 but three minutes later he pulled another attempt left of the posts.

Five minutes before the end captain Hanro Liebenberg was yellow carded for an illegal tackle, reducing his pack of forwards to seven with players for the remainder of the match.