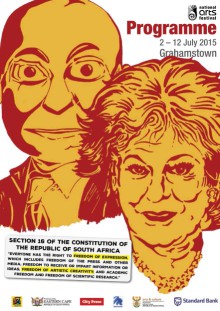 Gracing the cover of this year’s National Arts Festival programme is two of South Africa’s most acclaimed satirists.  And aptly so, considering that this year the Festival organisers have chosen to highlight the genre of satire and freedom of expression in place of their usual “featured artist” category.

And who better than to challenge and keep audiences on their toes at this year’s festival than Chester Missing – South Africa’s most notorious and controversial puppet – bringing you his funniest, freshest material in his hilarious new show, Missing. 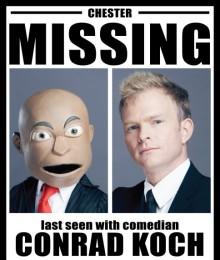 He’ll be accompanied as usual by his sidekick – SA’s top ventriloquist – Conrad Koch and two other puppets (who Conrad insists on dragging around with them, like those family members you can’t really get rid of, but would like to).

Ronnie, the monster, has been trying to sell drugs to audience members, and Hilary, the gin-soaked showgirl ostrich, is still nobody’s handbag.

Chester, like many South Africans these days, has some questions: “Where are we going?”, “Who are we?”, “Why are we still talking about race?”, “Will Jacob Zuma pay back the money?”, “Why is there a white guy keeping him in a suitcase?”, “Will Chester find himself, or will he stay MISSING?”

Brought to life by Conrad Koch, this so-called previously disadvantaged dummy is well known for his often outrageous, punch-packing, funny and frank views on the current South African state of affairs.

Conrad Koch is one of South Africa’s most in demand comedy talents.  Having been in the industry for well over 15 years, he has received local and international acclaim with his razor sharp satirical comedy.

“The arts need to challenge and provoke.  South Africa’s satirists, cartoonists, commentators and court jesters need, now more than ever, to be given the opportunity to be the public voice, the conscience, of the nation”, explains the Festival’s Artistic Director, Ismail Mahomed.

And Chester plans on doing just that!

For more information or for tickets, visit www.nationalartsfestival.co.za.