Biodiversity conservation in the Western Cape has been given a significant boost as the United Nations Educational, Scientific and Cultural Organisation (UNESCO) approved the extension of the Cape Floral Region Protected Areas (CFRPA) on the World Heritage List.

This approval was granted today by the 39th Session of UNESCO’s World Heritage Committee currently taking place in the City of Bonn, Germany from 28 June to 08 July 2015.

The CFRPA World Heritage Site was inscribed in 2004 as a natural serial property consisting eight Protected Areas with a total 557,584 ha, but has now been expanded with 163 additional land parcels, all existing Protected Areas, to a total of 1,094,742 ha. 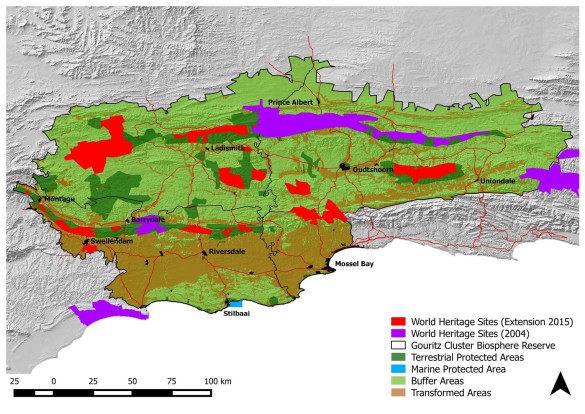 Says CapeNature CEO, Dr Razeena Omar: “In a province blessed with over 9000 plant species, many of which are endemic to this region, the people of the Western Cape have many reasons to celebrate nature. The approved extension of the CFRPA proves that the province is a successful example of ongoing ecological processes and it contains some of the most important natural habitats for the conservation of biodiversity.”

“The value of World Heritage status is not just about the prestige of managing an area recognised as being of Outstanding Universal Value (OUV), but also valuable as it ensures the area will receive appropriate management and the resources required.”

“This selection of protected areas adds up in a synergistic manner to represent the biological richness and evolutionary story of the Cape Floral Region.”

In order to qualify for World Heritage status, the following criteria have been met:

The CFRPA was inscribed on the list of World Heritage Sites in 2004 and in 2008 the extension nomination was initiated between the three management authorities involved, CapeNature, SANParks and the Eastern Cape Parks and Tourism Agency, under the authority of the Department of Environmental Affairs.

CapeNature’s Scientific Manager for Biodiversity, Guy Palmer, says: “Getting the CFRPA extended has been a long, yet rewarding process thanks to great work from all stakeholders involved. In the CFR there is an excellent foundation of relevant knowledge that has been laid down over many decades by many different individuals and institutions from countries across the globe.”

“A further extension to the CFRPA is also envisaged, hopefully in the not too distant future, when the majority of protected areas not included in this extension will be evaluated for selection.”

The concept of WHS was born out of the international realisation that the cultural heritage and natural heritage assets of the world were coming under increasing threat from a wide range of sources.  Countries were not always in a position to manage these assets in a manner that would ensure their persistence in the desired state in the long term.