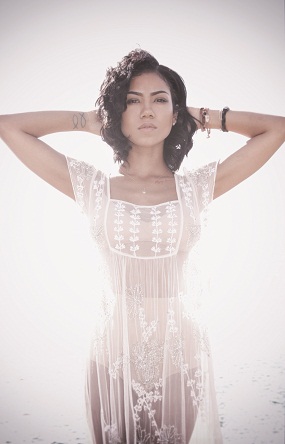 Jhene Aiko and Young Thug join global superstar NE-YO and African artists Bucie, Cassper Nyovest, Davido, Diamond Platnumz and Yemi Alade on stage at the Durban International Convention Centre in Durban, KwaZulu-Natal, South Africa for the fifth edition of the MAMA.  Honouring contemporary artists and achievers from across the continent, MAMA 2015 is sponsored by the KwaZulu-Natal Province in association with Absolut Vodka and in partnership with The City of Durban.

Bruce Gillmer EVP, Music, Talent Programming and Events, Viacom International Media Networks, commented: There is great energy around both Jhene and Young Thug following a strong year for both artists. We can’t wait to see them command the MAMA stage in Durban.”

Talented singer-songwriter Jhené Aiko rose to prominence in the early 2000’s and has collaborated with the likes of Drake, Kanye West, Akon and David Guetta. Her debut album, Souled Out, was released in September 2014 to great critical acclaim. In 2015, Aiko received three nominations at the 57th Annual Grammy Award for her EP Sail Out and the tracks ‘’The Worst” and “Blak Majik”. “The Worst” subsequently took home the Centric Award at the 2014 BET Awards.

Young Thug, a.k.a Jeffrey Williams, will also be performing at the MAMA 2015. Hailing from Atlanta, Georgia, the rapper is best known for his track “Stoner” and an eccentric, experimental style. He gained major recognition in 2014 with a string of successful singles including “About the Money” and “Lifestyle”, which reached 16 on the US Billboard Hot 100 Chart. Following collaborations with many other rappers, most notably Kanye West, in April 2015, Young Thug revealed that his long-awaited debut album is on the way, titled Hy!£UN35 (HiTunes).

Centered around the theme of “Evolution”, the MTV Africa Music Awards KwaZulu-Natal 2015 will honour the efforts and success of contemporary African artists and achievers across a range of music and lifestyle categories.

The MAMA 2015 will simulcast live across Africa on MTV Base (DStv channel 322), MTV (DStv channel 130) and BET (DStv channel 129) on Saturday 18 July at 21:00 CAT. The show will also be transmitted worldwide on partner stations and content platforms including BET International from 18 July. In addition, a special MAMA-themed edition of MTV’s acclaimed World Stage franchise will air globally on MTV channels around the world on 27 August 2015.

About MTV
MTV is the world’s premiere youth entertainment brand. With a global reach of nearly 785 million households, MTV is the cultural home of the millennial generation, music fans and artists, and a pioneer in creating innovative programming for young people. MTV reflects and creates pop culture with its award-winning content built around compelling storytelling, music discovery and activism across TV, online and mobile. Outside of the United States, MTV is part of Viacom International Media Networks, a division of Viacom Inc. (NASDAQ: VIAB, VIA), one of the world’s leading creators of programming and content across all platforms.

About KwaZulu-Natal
KwaZulu-Natal Province is South Africa’s leading tourist destination and a magnet for visitors from continental Africa and all points of the globe. Offering a unique blend of sophistication, cultural diversity and excitement in the most breath taking setting imaginable, KwaZulu-Natal is an enticing, spectacular and fascinating consumer and business tourism destination, flanked on one side by the warm Indian Ocean and – on the other – by soaring peaks.

About Durban
Durban is a natural paradise situated on the East Coast of Africa, popularly known for its gorgeous coastline of sun-kissed beaches and subtropical climate. Durban has recently achieved the global status of being a New 7 Wonders Cities of the World. This achievement is a great honour for the City of Durban and to be positioned amongst other leading global cities of the world, and proudly shows the commitment and competitive edge of our city as a leading Tourism, Events and Business Destination. The City has also been proudly acclaimed the Top 10 Cities to Visit in 2015 by New York Times, with key attributes reflecting on the rich cultural diversity and heritage of the city. The City is a trendsetter in offering great lifestyle, speckled with adventure activities, blessed with natural beauty and is an astonishingly liveable city. As a visitor, you are faced with the perfect ingredients to make your holiday unique and special. We invite you to enjoy this special natural paradise, take advantage of the warm Indian Ocean, enjoy the world-class shopping, fine dining restaurants, unique culture, vibrant eKasi lifestyle and be charmed by the warmest place to be.