If you have walked or driven past the Markotter Sports Grounds, you’ll notice a lot of activity as Paul Roos Gymnasium gets ready to host one of the biggest schoolboy rugby tournaments: the U18 Coca-Cola Craven Week from 13 – 18 July.

The future of South African rugby is bright and we encourage the community to go out and support these youngsters, as they prepare to dazzle us with their excellence. Tickets for the U18 Coca-Cola Craven Week will be on sale at Markotter Sports Ground in Stellenbosch, from Monday 13 July, and will cost R20 for adults and R10 for scholars.

Fetsi Mbele, IMC Marketing Assets Manager for Coca-Cola said: “Coca-Cola South Africa is extremely proud to support the development of South Africa’s next rugby heroes through the Coca-Cola Youth Weeks. For many of the participants this is just the beginning of a future in rugby. We strongly encourage local communities to get down to the events and show their support for our future heroes.”

“The Coca-Cola Youth Weeks offers the best young talent in the country the opportunity to showcase their skills and make their presence felt,” said SARU CEO Jurie Roux. “Springboks such as Handre Pollard, Jan Serfontein and Oupa Mohoje have made their way through these structures, and they will all be in contention for selection for the Springbok Rugby World Cup squad later this year. Come down to the Markotter Sports Ground in Stellenbosch, show your support and come and watch for our next generation of players.”

Teams from as far as Namibia and Zimbabwe will also participate in the tournament.

Ex-Paul Roos Gymnasium pupil and South Africa’s very first Idol, Heinz Winckler will perform during the opening ceremony on Monday, with Ryan O’Connor on the mic as MC for the day. Supporters can also look forward to the Instabooth, a charging station, giveaways and a live broadcast by a local radio station. The public is encouraged to use the official hashtag #WhereHeroesAreMade throughout the week. 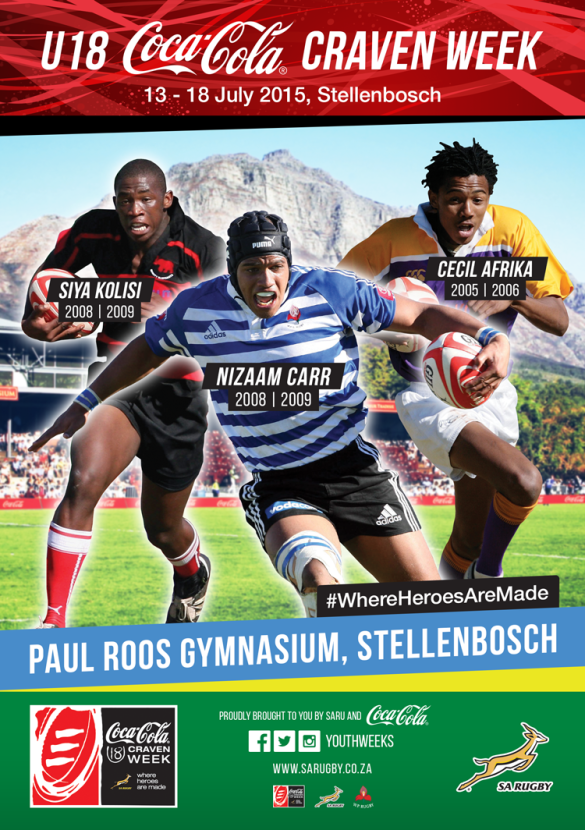