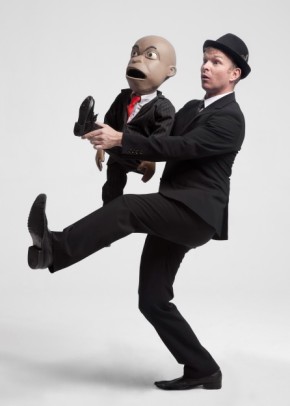 Following in the footsteps of local comedians such as John Vlismas, Loyiso Gola and Riaad Moosa, controversial puppeteer Conrad Koch and his notorious puppet, Chester Missing, will be making the trip to Canada this July for the annual Just For Laughs Montreal Comedy Festival.

Comedy Central (DStv Channel 122) is continuing its proud tradition of sponsoring South African comedians to perform at the internationally acclaimed festival which is taking place from the 8th to 28th of July 2015.  Joining Conrad and Chester is the larger-than-life SA comic, Jason Goliath.

Conrad Koch is one of South Africa’s most in-demand comedy talents and the winner of the Entertainer of the Year award for 2010.  Combining hilarious comedy with world-class puppetry, he has received local and international acclaim with his razor sharp satirical comedy.

Brought to life by Koch, Chester Missing – the so-called previously disadvantaged dummy – is well known for his often outrageous, punch-packing, funny and frank views on the current South African state of affairs.

“Chester Missing and I are extremely excited to be going to the JFL festival in Montreal, and are honoured that Comedy Central Africa has chosen to take us,” says Koch.  “Also, can we get a room next to Dave Chappelle’s please?”

A packed itinerary will make sure that Koch and Goliath make the most out of their Canadian adventure which includes performances at top clubs alongside some of the world’s top stand-up comedians.

Koch will be performing on the 23rd, 24th and 25th of July.  The performance on the 24th will be taped and broadcast on Canadian TV while highlights from the trip will air on Comedy Central Africa.

To join the conversion on social media about Conrad Koch and Jason Goliath’s trip to Montreal, use the hashtag #CCLiveatJFL.  For more information about Just For Laughs, visit www.hahaha.com.