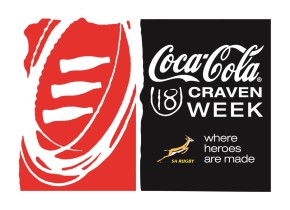 Cape Town – Eastern Province and KwaZulu-Natal on Tuesday stamped their authority on the second day of the Under-18 Coca-Cola Craven Week at the Markötter Sports Complex at Paul Roos Gymnasium in Stellenbosch as they registered encouraging victories in the top match-ups of the day.

Eastern Province, who took top honours at last year’s tournament, were in fine form against SWD in a repeat of the 2014 final match and registered a 41-31 victory, while KwaZulu-Natal defeated the Golden Lions 18-16 in a nail-biting encounter.

Griquas, the Valke and Griquas CD also started off their campaigns on a high note as they secured victories against the Leopards, Eastern Province CD and Zimbabwe respectively.

The third round of matches will be played on Wednesday, with hosts Western Province taking on the Griffons and Boland going up against Border.

Eastern Province started off their clash against the SWD Eagles with a bang thanks to their ability to create point-scoring chances and to capitalise on them. The team delivered a solid display with their forwards and backs combining well, while flyhalf Curwin Bosch dictated play with distinction and backed this up with his golden boot, which allowed them to dominate proceedings throughout the match.

Eastern Province had the first say thanks to a try by Riaan van Rensburg in the third minute, and they added another in the 17th minute, while Bosch slotted over a drop goal, while SWD were only able to kick a penalty in the half. This convincing start pushed the Port Elizabeth side 15-3 ahead at the break.

The second half proved to be a try festival as the teams showed fantastic flair on attack and backed this up with fine decision-making. While Eastern Province continued to build on their solid first half with another two tries, SWD they found their rhythm on attack and the rewards followed as they scored four tries to match that of the Eastern Cape side. Two extra penalties and another two drop goals by Bosch to take his personal tally in the match to 21 points, however, proved to be the difference between the sides on the scoreboard. These heroics earned Eastern Province a 41-31 victory.

The battle between KwaZulu-Natal and the Golden Lions was epic with the teams put their bodies on the line throughout the clash. The Lions opened up the scoring in the fourth minute with a penalty by Mthi Simelane, but this was cancelled out by KwaZulu-Natal as they crossed the chalk for the first try of the match. The exchanges that followed were tight, resulting in both teams opting for penalties to get points on the board. The Lions, however, fought back and their efforts paid off with a converted try four minutes before the break, which earned them a 13-10 halftime lead.

The second half was equally intense as the teams continued to use their physicality in the hope of powering their way through the defence, but with neither side giving an inch, they opted for penalties once again, with Simelane slotting over his third three-pointer and KwaZulu-Natal’s Bader Pretorius his second.

The Sharks, however, dominated territory and this allowed them to apply immense pressure on the Lions. But the Johannesburg team absorbed the pressure well. The Durban side’s efforts eventually paid off in the final minute as Xolisa Guma crossed the tryline to secure a nail-biting 18-16 victory.

The clash between the Leopards and Griquas was a physical forward battle as the teams both used their big forwards to try to force their way onto the front foot. On occasions they looked for space out wide in an attempt to sneak through to the tryline, but with the teams closely matched on attack and defence, it proved to be an epic battle until the end as only five points separated the sides on the scoreboard for a lengthy period in the second half.

The Leopards opened up the scoring in the 12th minute with a try, but back-to-back tries by Griquas’ Janco Cloete within three minutes pushed the Kimberley side into the lead. The Leopards hit back with two tries of their own minutes later to take a 17-14 halftime lead.

Griquas tightened up their defence in the second half and stepped up their attack, which allowed them to break through the determined Leopards’ defence for another two tries, one of which was by Janco Cloete to secure his hat-trick. This earned Griquas a hard-earned 28-17 victory.

The Eastern Cape side, however, came out firing in the second half with two tries in two minutes by Geoffrey Dakin and Xolile Mdlokovana, which allowed them to reduce the deficit on the scoreboard tremendously. But the Valke cancelled this out as they powered their way to a strong finish with three tries to secure a convincing victory.

Griquas CD and Zimbabwe were involved in a tight tussle from the outset as both teams tried hard to breach the defence but battled to force their way through. With the Griquas CD defence holding well in the middle of the field, Zimbabwe opted to spread the ball wide and this paid off as they scored the first try of the match compliments of Ben Meredith, which proved to be the only points of the half.

The second half was equally tight as Griquas CD used their forwards in an attempt to gain ascendancy, with flank and captain Cobus Wiese leading by example, while Zimbabwe’s backs made their presence felt.

These strengths earned them each a try in the third quarter, but mistakes at crucial times by Griquas CD denied them from crossing the line a few more times. Griquas CD, however, staged a dramatic comeback in the dying minutes as they crossed the tryline twice to snatch a 17-12 victory.