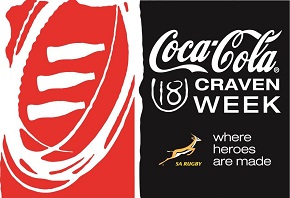 DHL Western Province on Saturday took top honours in the Under-18 Coca-Cola Craven Week in style as they overpowered Eastern Province 95-0 in the main match at the Markötter Sports Complex at Paul Roos Gymnasium to set a new record for the highest score in the final match of the tournament.

The Cape side were in fine form from their opening match as they defeated the Blue Bulls 20-13 and registered an emphatic 65–5 victory against the Griffons on Wednesday, which earned them a place in the final match against Eastern Province, who finished last year’s tournament as the top team.

A huge battle was expected on the final day as Eastern Province beat SWD 41-31 and KwaZulu-Natal 23-22 respectively, but the hosts came out with a bang and completely overpowered the Port Elizabeth side.

Eastern Province tried hard to make their presence felt on attack but their efforts were countered by the water-tight Western Province defence.

In the other big game on Saturday, SWD defeated KwaZulu-Natal 24-19 in a nail-biting clash.

The other matches were also high-scoring affairs with the Free State defeating the Pumas 63-35, while Griquas beat Eastern Province CD 51-10, and the Golden Lions defeated the Griffons 47-29.

The Leopards, meanwhile, beat the Limpopo Blue Bulls 42-17 and Griquas CD outplayed Border CD 54-39, while Boland went down 40-12 against the Blue Bulls.

DHL Western Province came out firing on all cylinders from the opening minutes of the final match against Eastern Province thanks to the fantastic interplay between their forwards and backs, their raw pace out wide and their fine decision-making. So psyched up were the hosts they retained possession and used their speedy backs to sneak through the gaps in Eastern Province’s defence, while they defended like demons. This forced Eastern Province to feed off the scraps for the entire half. This remarkable form earned them five tries for a significant 43-0 halftime lead.

They continued to stamp their authority in the second half and crossed the tryline twice early on to stretch their lead to 57-0, which marked a new record for the highest score in the final match of the Under-18 Coca-Cola Craven Week. Ironically the highest score up until this match was Western Province’s 52-3 defeat against the Free State in the 2007 tournament also at Paul Roos Gymnasium. This did not stop them from running circles around Eastern Province on attack, as everything the Cape side touched turned to gold, while the Port Elizabeth side had no reply. With momentum and form favouring the Cape side they added another seven tries to their tally to seal an unforgettable 95-0 victory. The match was also particularly memorable for centre Manuel Rass, who earned his hat-trick.

KwaZulu-Natal tried hard to stamp their authority early on against SWD and looked threatening from the outset, but they were shut out by the effective SWD defence.

The George side found space out wide and capitalised on the opportunity to take a 7-0 lead. But the deficit was reduced to 7-5 as KwaZulu-Natal used their powerful forwards to power their way to the tryline to score.

The rest of the half proved to be a hard battle as both teams tried to get close to the tryline, but were shut out by the defence.

The second half was equally hard-fought as the teams threw everything at one another on attack and supported this with a solid defensive effort.

SWD, in particular, tried to stretch the KwaZulu-Natal defence in an effort to cross the line and after being denied on a few occasions, they finally broke through the defence in the 48th minute and made the most of this momentum by scoring three tries within eight minutes.

KwaZulu-Natal, however, forced their way back into the match in the last two minutes with two tries by Bader Pretorius to take their total for the match to three. But with time running out fast they had to settle for a 24-19 defeat.

The Golden Lions were in fine form against the Griffons as they showed innovation on attack and used their try-scoring chances well to secure a 47-29 victory.

The Lions opened up the scoring in the third minute with a try by Ruan Vermaak, but the Griffons hit back minutes later with a try of their own by Fanie Vermaak. The Johannesburg side, however, dominated the rest of the half as they scored two more tries, while limiting the Griffons to a penalty for an encouraging 26-10 lead at the break.

Both teams found their rhythm on attack after the break and managed to force their way through the defence resulting in a thrilling second half.

The Lions scored first and the Griffons bounced back minutes later with two tries in three minutes. The Golden Lions retaliated with their fifth try and another shortly before fulltime to inflate their score to 47. The Griffons, however, fought until the end and managed to score one more try before the end of the match, but these efforts were not enough to undo the Lions’ strong start.

The Leopards came out strongly in their clash against the Limpopo Blue Bulls with their first try being scored in the third minute, while they added another in the 12th minute to take a 14-0 lead.

The Limpopo Blue Bulls tightened up their defence soon after and stepped up their attack, which allowed them to score their first try in the 16th minute. With both teams determined to win, the second quarter was tight, with neither team giving an inch, which resulted in the Leopards entering the break 14-5 ahead.

The opening 15 minutes of the second half was equally tight as the teams continued to run hard at one another, but the flood gates opened in the 45th minute as both teams made their way through the defence.

The Leopards struck first as they scored three back-to-back tries within 10 minutes, and the Limpopo Blue Bulls followed with two tries within five minutes. The Leopards, however, ran in their sixth try on the stroke of fulltime to finish the tournament on a high note with a 42-17 victory.

The Blue Bulls forced their way to a 16-7 halftime lead against Boland as they slotted over two penalties compliments of Eddie Fouche and two tries by Abner van Reenen and Embrose Papier respectively, while they limited Boland to a converted try by Keanan Boonzaaier.

The Bulls, however, took control of the second half and ran riot on attack, which earned them four tries in what was a fantastic display of attacking rugby. They supported this with a solid defensive effort, which left Boland scrambling to make their presence felt. Despite falling far behind on the scoreboard Boland showed their fighting spirit and managed to cross the tryline shortly before the final whistle to reduce the deficit 40-12.

The first half between the Pumas and Free State proved to be a ding-dong battle as the teams both delivered well-balanced performances using their forwards and backs. Free State struck first in the third minute with a try by Godfrey Simelane, but the Pumas’ Mfundu Ndhlovu cancelled out the try in the sixth minute as he crossed the line.

The Bloemfontein side added two more tries before the break, which they failed to convert, while the Pumas touched down once more, and with both their conversions successful they entered the break trailing only 15-14.

The Free State continued to score tries at will early in the second half and scored back-to-back tries within four minutes to kick-start the half and then added another to stretch their lead immensely.

The Pumas, however, showed their fighting spirit to score their third try of the match in the 46th minute to reduce the deficit slightly. But the Bloemfontein side struck back soon after with another three tries to take their total for the match to nine.

The Pumas, however, refused to lie down and touched down twice more, but the Free State were not done and scored another two late tries for a 63-35 victory.

Griquas CD came out firing against Border CD as they scored three tries in the first 14 minutes to make their presence felt early on. Border CD hit back with their first try in the 20th minute and added another in the 31st minute as well as a penalty.

These efforts, however, were cancelled out as their defence continued to let them down, which paved the way for Griquas CD to increase their try tally to five before the break to take an encouraging 35-15 lead.

The Northern Cape side continued to make their presence felt in the second half and earned the rewards with three more tries, but Border CD fought back with intent and managed to score three tries of their own, which made for a thrilling second half. Unfortunately these efforts were too little too late, and Border CD were forced to settle for a 54-39 defeat.

The first half between Border and the Valke proved to be a tight tussle as both teams tried to get onto the front foot early on in the hope of finishing the tournament on a high.

The Valke scored the first try in the fourth minute, and they added another in the 26th minute, but their conversions were unsuccessful. Border, meanwhile slotted over a penalty and scored two tries, which earned them a narrow 15-10 lead at the break.

The Valke, however, battled to keep up with Border in the second half as their flyhalf left the field injured and they received a yellow card, which allowed Border to control proceedings. The team did just that and used their point-scoring chances well to add two penalties and a try to their tally for a 28-15 victory.

Griquas wasted no time stamping their authority against Eastern Province CD as they ran in an impressive four tries in the first half and slotted over a penalty to accumulate 25 points in the half. Their defence was equally effective as they limited the Eastern Cape side to only a penalty before the break.

The Kimberley side picked up where they left off when play resumed as they retained possession and put together phases, which paid off with another four tries in the half to stretch their lead significantly.

Despite trailing far behind on the scoreboard Eastern Province CD fought back and managed to score their first and only try of the match in the 56th minute, which they converted to take their score to 10. However, they were unable to add to this in the dying minutes and went down 51-10.

The first half between Namibia and Zimbabwe was tight as the teams threw everything at one another in the traditional test. Such was the closeness of the half that Namibia scored the first points in the 20th minute compliments of a try by Stefan Hattingh, while Zimbabwe crossed the tryline two minutes before half time to level the scores at 7-7.

Namibia, however, found their rhythm in the second half and used their point-scoring chances well, which allowed them to break away on the scoreboard thanks to three more tries and a penalty. They backed this up with a solid defensive effort, which denied Zimbabwe from adding to their score for a convincing 29-7 victory.