The month of August is synonymous with celebrating women in South Africa, and Ster-Kinekor has the perfect way for women everywhere to celebrate this special month. Connect with your girlfriends, mothers and sisters, and spend some quality time together, while enjoying a feel-good film with some of Hollywood’s famous leading ladies. 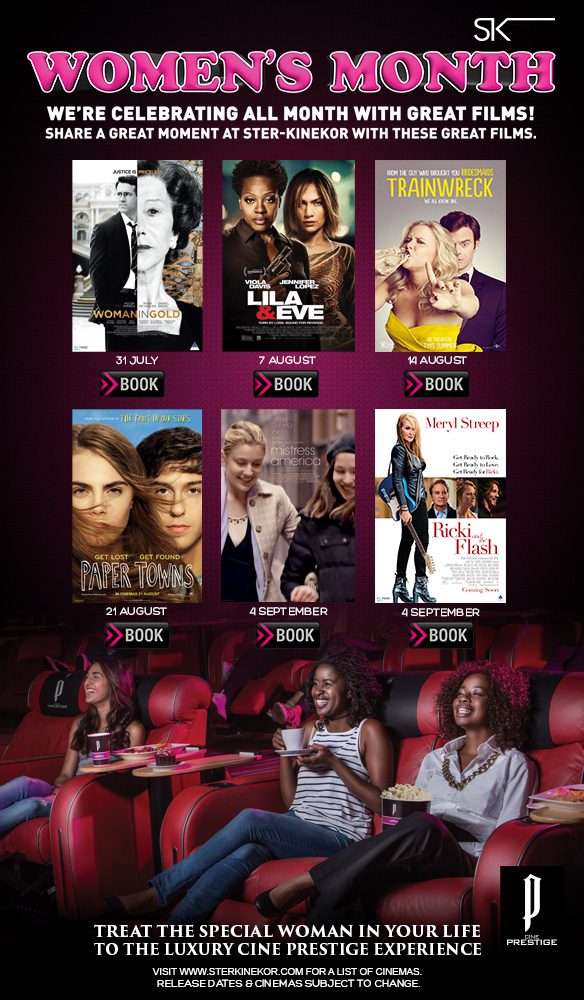 The great line-up of films releasing to celebrate Women’s Month this August, include: Woman in Gold that released on 31 July; Lila & Eve releasing on 07 August; Trainwreck (on 14 August); Paper Towns (21 August); and Mistress America and Ricki & the Flash, both releasing on 04 September. All these great titles promise ‘great moments’ to share, laugh, cry, love and smile together.

Woman in Gold stars Dame Helen Mirren as Maria Altmann, a Holocaust survivor in her eighties now living in Los Angeles. She is trying to recover some of her family’s art that was stolen by the Nazis in Vienna prior to World War II. Together with her young lawyer, E. Randolf Schoenberg (Ryan Reynolds), she decides to take on the government of Austria and fights them for almost a decade to reclaim the famous artist Gustav Klimt’s iconic painting of her aunt, ‘Portrait of Adele Bloch-Bauer I’ – the Woman in Gold of the film’s title. This drama has a running time of 1hr 46mins, and carries a 10-12PG classification.

Lila & Eve is a drama revolving around Lila (Viola Davis), a grief-stricken mother reeling from her son’s murder. She attends a support group where she meets Eve (Jennifer Lopez), whose daughter has dies. Eve urges her to take matters into her own hands to track down her son’s killers. When the local authorities fail to take any action, the two of them embark on a journey of revenge, but also one of recovery. This film has a running time of 1hr 34mins, and carries a 13LV classification.

Both these thrilling dramas are showing now on the big screen at Ster-Kinekor and Cinema Nouveau cinemas countrywide, and bookings are open.

Trainwreck is a romantic comedy about magazine writer Amy (played by Amy Schumer), whose father drilled it into her head that monogamy is not realistic – as a result, she has made promiscuity her credo by which to live her life. As much as she enjoys an uninhibited life free of commitment, Amy is stuck in a rut. While writing a profile about the charming and successful sports doctor, Aaron Conners (Bill Hader), she finds herself actually falling in love for the first time – and what’s more, Aaron seems to like her too. How will this commitment-phobic girl face her fears know that she has met the good guy? Watch this hilarious film at Ster-Kinekor from 14 August to find out!

Another drama, Paper Towns is a coming-of-age story that centres around Quentin (Nat Wolff) and his enigmatic neighbour, Margo (Cara Delevigne), who loved mysteries so much she became one. After taking him on an all-night adventure through their hometown, Margo suddenly disappears – leaving behind cryptic clues for Quentin to decipher. The search leads Quentin and his quick-witted friends on an exhilarating adventure that is in equal parts both hilarious and moving. Ultimately, to track down Margo, Quentin must find a deeper understanding of what true friendship – and true love – really are.

In Mistress America, Tracy (Lola Kirke) is a lonely college freshman in New York. She is rescued from her solitude by her soon-to-be stepsister Brooke (Greta Gerwig), an adventurous girl about town who entangles Tracy in alluringly mad schemes. This film is a comedy about dream-chasing, score-settling, makeshift families, and cat-stealing.

Ricki & the Flash stars Meryl Streep as Ricki, an aging rock star who abandons her family to chase fame and stardom. The sacrifice delivers the stardom she craves, but costs her a relationship with her family. After years of rocking with her band, The Flash, her life is interrupted by a call from her ex-husband (Kevin Kline). She discovers their estranged daughter (Mamie Gummer) is going through a tough situation and decides to head back home. Given the opportunity to reconcile and make things right, Ricki must again choose between the music she loves and the family she has lost.

Ster-Kinekor is ready to rock you this Women’s Month! For more information on these six great titles releasing at Ster-Kinekor cinemas over the next few weeks, visit the website, www.sterkinekor.com, or download www.sterkinekor.mobi or the SK App on your smartphone. You can also book at the box office.  For news and updates, go to Facebook: Ster-Kinekor Theatres | follow Ster-Kinekor on Twitter: @sterkinekor. For all queries, call Ticketline on 0861-Movies (668 437).