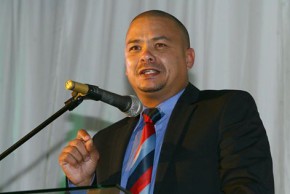 In his presidential address at the Annual General Meeting of SWD Cricket that took place in Oudtshoorn on August, 11th the chairman of the Board, Mr Rudy Claassen, highlighted the past year as an era of huge transition with the registration of South Western Districts Cricket as a Non-Profit company. It earmarked the smooth transition regarding the establishment of the operations of the Board of Directors and Board committees and we have met the required compliance criteria as set by Cricket South Africa (CSA). He thanked all the stakeholders for the manner in which they have taken up the challenge for setting a standard of corporate governance during the transition period.

The biggest challenge since SWD became a full affiliate of CSA in February 2013 was to finalize the shareholder status within the Cricket Eastern Cape structure. The Board of Directors of SWD Cricket, at a meeting that was held on 26th March 2015, resolved to delink from Cricket Eastern Cape. The Western Cape Cricket (Pty) Ltd agreed to the inclusion of South Western Districts to become part of all the Western Cape Cricket structures and the entire process is on the brink of finalization. It is critical matter for the future of SWD Cricket specifically in terms of commercial value, hosting of high profile events, television coverage and the upgrading of our stadium.

A huge focus was placed on the implementation of the Operational model for South African cricket the past season and SWD Cricket was rewarded for its operational structures and programmes during the 2014/15 season as SWD ended third overall. The purpose of the Incentive model is to drive improvement in several areas and to provide members with an opportunity to be recognized and rewarded for performance. The primary purpose of the scorecard is to measure performance in order to reward members who exceeded basic delivery requirements of the CSA funding objectives. It is, however, important to note that, over and above measuring and rewarding excellence; one of the main aims of the scorecard is to establish the level of delivery of each member in the specific programmes/activities related to the Operational model.

The strategic plan of SWD Cricket, including the vision and mission was reviewed during April 2015. The implementation process that is supposed to begin in the 2015/16 year, includes the development of action plans, including objectives, timelines, criteria employed to evaluate progress, assignments of responsibility and budget plans. This process will have the purpose of not only realizing the strategic directives but also of institutionalizing one of the fundamental objectives of strategic planning: strategic thinking and acting. Monitoring and evaluation, whose goals are to gauge progress and to determine if changes in the strategic plan or any of its components are needed, will necessarily be a part of that implementation effort.

He highlighted the inclusion of Jean Heunis in the SA Colts team, Lyndon Volkwyn in the SA Tertiary Team, Luthando Mnyanda (Powerade SA Academy intake), Michaela Andrews (SA Girls u/19) and Hanno Kotze (SA u/23 Colts). It is evident that the high performance program in the province is on track and the further achievement of Michaela Andrews when she received the award at the Annual CSA Awards Function as Player of the Tournament for the CSA Girls U/19 tournament is proof that this province can produce quality players.

The Council also approved the inclusion of New Dawn Park Cricket Club and Hartenbos Cricket Club (who was previously affiliated) as affiliate members of the company.

It was also reported that the Board’s finances have again received an unqualified audit report for the 2015 financial year and recorded a surplus of a surplus of R436,289.

Mr Enrique Pietersen of Union Stars CC was elected as a non-independent director in the place of Enrico Bell who resigned in April this year. A further vacancy that occurred with the recent resignation of Mr Gerry Gertse will be filled at the next Members Forum meeting in September.