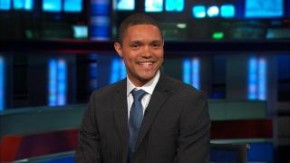 Johannesburg, 17 August 2015: Comedy Central (DStv channel 122) is offering one lucky viewer the comedy trip of a lifetime to witness Trevor Noah’s debut as host of The Daily Show with Trevor Noah.  The 24 hour comedy channel will be flying one winner and their guest to New York on an all-expenses paid trip to watch Trevor’s first ever show on Monday 28 September.

The news comes as SA’s most famous comedy son prepares to take on the biggest challenge of his career at the helm of the long-running satirical comedy franchise, following the departure of long-time anchor Jon Stewart – after more than 2,600 programmes and 16 years in the job.

To support the new incarnation of the show, for the first time, Comedy Central will be running, full catch-up episodes of The Daily Show online at www.comedycentralafrica.com from 30 September, while Noah’s smiling face will grace the front page of DStv’s subscriber magazine (September issue).