The Nedbank Madibaz swimming club made NMMU history when they hosted 178 swimmers for their first ever gala at the Newton Park Indoor Swimming Pool in Port Elizabeth on Saturday. 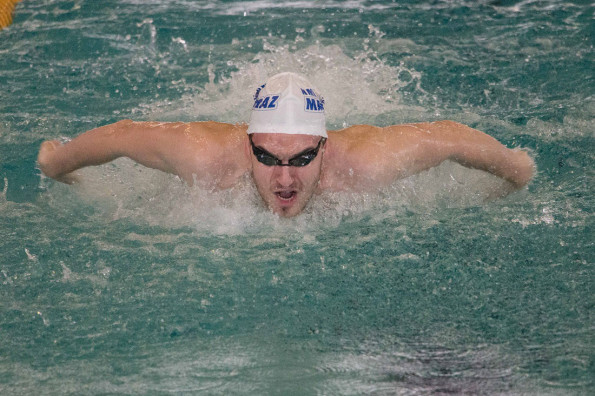 This is first time the institution has hosted a swim meet – both in its former incarnations as the University of Port Elizabeth, Vista University and PE Technikon and in the post-merger decade as NMMU.

“It has been a big step for us as a university swimming club to stand up and host such a big event on the sporting calendar,” said Madibaz swimming manager Melinda Goosen.

“As the only university in PE and one of the top three swimming universities in the country, it’s important for us to play an active role in the swimming community and become the institution of choice.”

Swimmers from various Eastern Cape clubs – as far afield as Knysna, East London and George – participated in the inaugural event.

Goosen said the hosts had missed their top three swimmers Edward Johannisen and twins Alard and Alaric Basson, who will participate in the African Games, which starts in Brazzaville, Congo, this weekend.

“They departed on Saturday for their camp to join the South African team.”

Their Madibaz teammates nevertheless impressed in the pool, with Jamie Jackson bringing home gold in the men’s 50m breaststroke and fly, and Thomas Hansford claiming the 100m fly.

Sarah Jorgensen took the double in the women’s 50m and 100m breaststroke while Zandi Loots rounded out NMMU’s individual gold medal haul in the 100m backstroke.

In the relay events it was a close tussle between the NMMU mixed team of Loots, Jorgensen, Jackson and Hansford and PEA Swimming Club’s Greg Kotze, Dylan Smith, Tarryn Els and Kaley Gouws.

NMMU emerged victorious in the 4 x 50m medley, while PEA claimed gold in the final event of the day – the 4 x 50m freestyle.

While PEA’s Kotze and Els walked away with the senior Victor and Victrix Ludorum trophies, Goosen said she considered this a win for the future of swimming at the university.

“Both Greg and Tarryn will be studying at NMMU next year and are looking forward to their future with us.”

The junior winners were Alex Laier of Knysna Dragons and Trisha Pollicutte from Fish Eagle Aquatics.

Goosen said all winning times for the inaugural event would be registered as gala records.

The event was supported by the club’s title sponsor Nedbank, as well as product sponsors Bos Sports Drink and Arena.

“It is so important for us to have these partners on board to make the gala a success and help promote the growth of the club,” said Goosen.

She said the gala would become a permanent fixture on the Eastern Cape swimming calendar and that the date for the 2016 event had already been set for August 27.