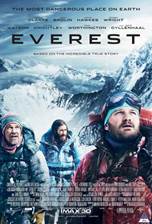 Ster-Kinekor: Great Moments at their Greatest

Nothing you have experienced can prepare you…

EVEREST: the IMAX 3D Experience® releases onto Ster-Kinekor’s five IMAX® screens around the country on Friday, 18 September. If there is one film that should be experienced in the immersive IMAX theatre, it is EVEREST: a film that features the highest mountain in the world as its central character should be viewed on the country’s biggest screens.

This gripping human drama is based on the true story of two Everest expeditions in 1996. It will have audiences on the edge of their IMAX seats, gripping onto their ropes and each other, as they make the perilously dangerous climb to the summit of the world’s highest mountain, step by laboured step with the film’s characters.

The IMAX release of EVEREST has been digitally re-mastered into the image and sound quality of An IMAX 3D Experience® with proprietary IMAX DMR® (Digital Re-mastering) technology. The crystal-clear images coupled with IMAX’s customised theatre geometry and powerful digital audio, create a unique environment that will make audiences feel as if they are in the movie – and on the mountain!

Inspired by the incredible events surrounding an attempt to reach the summit of the world’s highest mountain, EVEREST documents the awe-inspiring journey of two different expedition teams, challenged beyond their limits by one of the fiercest snowstorms ever encountered by mankind. Their mettle tested by the harshest elements found on the planet, the climbers face nearly impossible obstacles as a lifelong obsession becomes a breathtaking struggle for survival.

Some live and some die, but as one character notes: “The last word always belongs to the mountain…”

The high-altitude thriller, EVEREST, makes its mark on the IMAX® 3D screens at Ster-Kinekor Gateway in Durban, The Grove in Pretoria, Cape Gate in Cape Town, Baywest Mall in Port Elizabeth and the recently opened IMAX® theatre at Ster-Kinekor Cradlestone Mall in Krugersdorp, on Friday, 18 September. The film also releases at all Ster-Kinekor cinemas nationally in 2D and 3D on the same day. Bookings are now open. The running time of the film is 2hr 2mins and it carries a 7-9 PG restriction.

For more information on Ster-Kinekor and IMAX®, download the Ster-Kinekor App on your smart phone for updates and to book tickets from your mobile.  To find out what other exciting promotions Ster-Kinekor has on offer, visit www.sterkinekor.com or sterkinekor.mobi. Follow @sterkinekor on Twitter or Ster-Kinekor Theatres on Facebook. For queries, call Ticketline on 0861 MOVIES (668 437) or book at the box office.