It has been another year of success and personal growth for the young players of the Tsogo Sun Soccer Academy, as the season closed with an exciting tournament on Saturday 19 September at Lusaka Sports Complex in Swaneville on the West Rand. 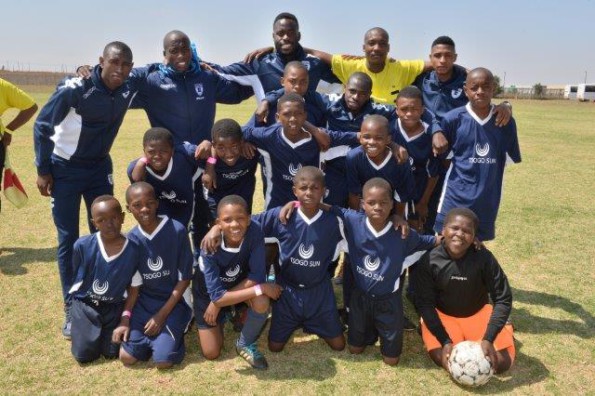 Gift Mokguo, head of the Soccer Academy and U19 soccer coach, who has been with the programme since its inception in 2010, is enthusiastic about the marked changes that not only he, but also teachers and parents, witness in a large proportion of its players. “One of the biggest changes that we see and are told about is how these boys now show more respect – for their teachers and parents, their classmates, their team mates, and for themselves. And they listen when they are told things. We instil these values in the players every week when we do life skills  both on and off the field.”

To be a part of the programme, the youngsters also have to maintain a good academic record, and homework in the specially-installed containers at Swaneville will take precedence over soccer practice if necessary. “Our Academy is very different from other academies in Gauteng. Our emphasis on life skills, values, and academic success is not common, and is very appreciated by the parents of our players, as well as by the players who can see that they are being equipped to make better choices throughout their lives,” says Mokguo.

“Soccer has proved to be an excellent catalyst for change in the lives of learners in disadvantaged communities. We have many success stories, but one that stands out for me was Goitseone Pitso, who started with the Academy in 2010. Last year he told us that he was sure that without the Academy he would have been in jail.” Pitso said that the soccer team took him off the streets and away from the criminal activities that some friends were involved in. “Here I learned self-discipline, to behave when I am around people, and how to show respect.”

Tshepang Mothoagae, who joined the Academy in 2010 at age 12, says he too has learnt a lot more than soccer. “I learnt to respect my coaches, my team, and other players from other teams. They also taught us life skills and we learnt things like using electricity correctly, how to manage money, and how to be a better person. I want to say thank you to Tsogo Sun.”

The  programme operates in 35 schools in Kagiso on the West Rand, working with 40 teachers and more than 1 000 learners, providing closing tournaments, inter-school leagues that run weekly for six months, ‘coaching the coaches’ programmes, lifeskills, and a development academy for talented players. The most talented players of each age group are also provided with an opportunity to participate in a SAFA-affiliated league – the Soweto FA League – each year.

This year the Academy added a school holiday programme to its activities, which ran in July and included various lifeskills workshops for 80 players between 13 and 19 years. Soccer practice was woven in between the sessions to keep them fit and healthy.

“Included were valuable skills such as a two-day certified first aid training course for the older players, lessons on financial literacy, an informative workshop on substance abuse by Westview Clinic, as well as ‘U-Shine’ sessions that focused on empowerment and self-confidence for these young learners,” says Shane Collinson, Director of Operations and Complex General Manager at Silverstar Casino, which is responsible for the successful running of the Tsogo Sun Soccer Academy.

But, adds Paine, this focus on skills to enable the players to be responsible members of society has not detracted from their soccer prowess. Several of the youngsters have been scouted by clubs such as Kaizer Chiefs, Bidvest Wits, and Orlando Pirates – and are doing well. Adds Mokguo, “Most recently, one of our U19 players, Letlogololo Letshuene, was spotted by Orlando Pirates when we were playing against them in a Soweto Football League match. We beat them 3-1 and Letlogololo scored two of the goals. We are proud of him and wish him well.”

After the closing tournament, Tsogo Sun Soccer Academy takes the U20 team away in recognition of their hard work, their achievements, and as a farewell gesture. This year the team will be visiting Durban where they will participate in a Metro tournament as well as having many exciting new experiences such as staying in a hotel, seeing the sea, and much more.

“Our soccer programme is touching lives in a sustainable way, but what has contributed  to its success are our partnerships with the schools, the SA Football Association, and the communities. The Academy has grown steadily over the years and we’re proud of what so many of our young soccer players are achieving in life through it,” says Paine.