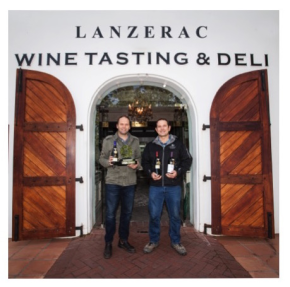 Reaffirming its position in the wine industry Lanzerac was honoured with the prestigious JF Hillebrand Pinotage Trophy for its Lanzerac Pinotage 2013 at the 2015 Michelangelo International Wine & Spirits Awards. The results were announced at an awards function in Somerset West on Friday, 18 September.

What makes this award so significant is that ahead of Heritage Day on 24 September it is a reminder to those in the industry that Lanzerac bottled the first Pinotage, a variety unique to South Africa,  in 1959 (released in 1961). This proudly South African varietal was created by Professor Perold in 1925 when he crossed Pinot Noir with Cinsaut/Hermitage.

Now in its 19th year, the Michelangelo International Wine & Spirits Awards is the only wine competition in South Africa with an exclusive international panel of accredited wine judges, wine makers, wine masters, journalists and sommeliers.

This year 17 international wine and spirits specialists from 15 countries were joined by local judge, Gregory Mutambe, as well as brandy and spirits judges, Dave Hughes and Dr Caroline Snyman, to judge the entries over 6 days in mid- August. A total of 1665 entries from 364 producers were entered in a total of 48 classes, including liqueurs, brandy and grappa.

The Lanzerac Pinotage 2013 displays an excellent deep colour with ripe berries and plums on the nose and palate with a good mouth-feel and lingering aftertaste. Full-bodied, complex with a beautiful fruit/wood balance and a good tannin structure that will allow it to age extremely well. This award-winning wine is sure to be a hit around any dinner table. Available directly from the Tasting Room at R125 per bottle, or select retail outlets nationwide.