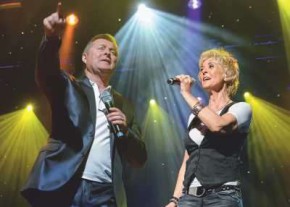 Legendary Dutch band BZN will be singing all the hits which made them household names in South Africa in the Eighties when they embark on their South African tour at the end of October. They’ll be criss-crossing across the country, taking their music to their fans.

According to Anny Schilder and Jan Keizer, lead singers of BZN, they can’t wait to perform in South Africa again. “South Africa has always been good to us,” says Anny. “We love the country and its people”.

It will be 40 years next year since BZN had their first major hit, “Mon Amour” and 40 years since Anny and Jan started singing together.

Anny and Jan both grew up in a small Dutch town called Volendam. “Those days, every family in Volendam made music. So even when ‘Mon Amour’ became a hit, we knew the pressure was on. At any given time some other band from Volendam could hit the big time,” says Jan, an extremely modest and likeable guy. “We would go on a world tour and I would come back to Volendam and go to the butcher…and then I would have to wait my turn just like everyone else.”

This is partly the reason why BZN has managed to survive for so many years. They’re never too busy or too tired for their fans. “Without our fans we are nothing,” says Jan.

To make sure they reach all their South African fans this time around, Jan and Anny and a 6-piece orchestra will be performing in towns such as Kimberley, Klerksdorp, Nelspruit, George, Bloemfontein and Paarl.

“Our fans told us last time they want to hear our hits. Well, that’s exactly what we’ll be giving them – a show jampacked with all the BZN hits that topped the charts in South African in the eighties,” says Jan.

The songlist include BZN classics such as “Yeppa”, “Tonight”, “Wheels on Fire”, “Le Legionnaire”, “Waltzing Maria” and of course, “Mon Amour”, the song that started it all.

“Can you believe it would be 40 years next year (2106) since we became an overnight success with ‘Mon Amour’?” asks Jan.

The two can’t help but smile when they talk about those early years. BZN was looking for a female singer and they held auditions. Anny, a friend of Jan’s sister, got the job. “We didn’t really like each other in the beginning,” says Anny. “But our voices sounded fantastic together,” says Jan. “Mon Amour” was Anny’s first song she sang with the band.

The song was recorded and at the Volendam Carnival, one of the highlights on the town calendar, one could hear the song in every pub and restaurant. Little did the band know that a well-known Dutch Radio celebrity attended the carnival. He loved the song and decided to add it to his “songs of the week” playlist on Radio Veronica, a regional radio station in the Netherlands.

Within a week the song went from the number ten spot to number one where it remained for five weeks.

This was the start of a remarkable career. BZN has had over 50 hits in the Dutch hit charts to date, and are the only music act to have had top 40 hit singles for 26 consecutive years (1973-1998). They recorded more than thirty albums, and received countless awards and accolades.

Band Zonder Naam has truly stood the test of time. As one journalist remarked: “They should now change their name to BZE (Band Zonder Einde).”

The full tour programme is:

Tickets for BZN – The Greatest Hits Show are available from Computicket.