The new Afrikaans rock band, NAGLIGTE, released their first single and lyric video titled DIT STOP NOU during early September 2015.  The reaction from media and public has been overwhelming.  Within a week after this release they attracted the attention of one of the biggest record labels in the world.  Universal Music South Africa did not hesitate and snatched this new rock band before anyone else could! 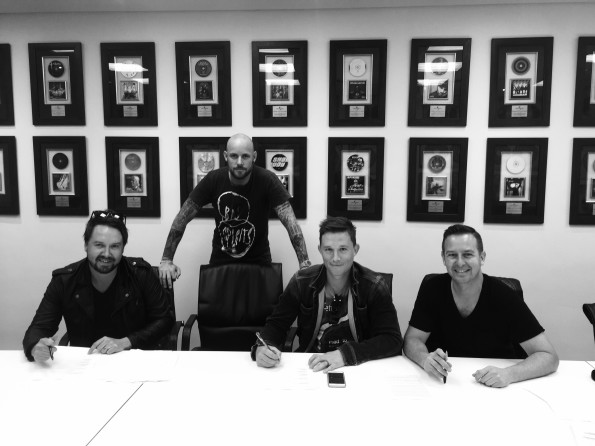 “We are thrilled at the opportunity to work with the boys from Nagligte. We’ve wanted to sign a good, cutting edge Afrikaans rock act for a while, and Nagligte tick all of the proverbial boxes. They’re a talented group of guys with a very clear vision of what they want to achieve.” (Kevin Grenfell – Head of A&R, Universal Music South Africa)

They started out in 2000 when Roof and Wynand met each other at University.  At the beginning they were skeptical of one another’s musical abilities, but after their first performance the writing was on the wall: “We’re starting a band!”

For more than a decade their dream was pushed aside and gathered dust between IRP5’s.  At the beginning of 2014 their dream started getting momentum when they started writing song with Eddie.  “We were so fed up with our jobs.  We just wanted to do something to get out of this rat race”, says Roof.  All three members are professional business men.

“We are super excited and honoured to work with the team at Universal Music South Africa and look forward to the road ahead.  Their experience, resources and enthusiasm for Afrikaans rock music is fantastic.  We look forward to rocking in Afrikaans!” (Jacobus Roof Brink – NAGLIGTE)

Their debut album, HOOP IN DIE DONKER, will be released during November 2015.  The official album launch will be held at Weiveld on 25 November 2015.