With the release of her debut album BREEK DIE STILTE (BREAK THE SILENCE) in May 2015, Cordelia created a stir in the Afrikaans music industry. It was especially her hit song Mal In Jou Kop that attracted a lot of attention and which rapidly reached the number one position on various radio stations in South Africa. The song’s video has been watched 111 000 times on YouTube and is regularly broadcast on national television channels. 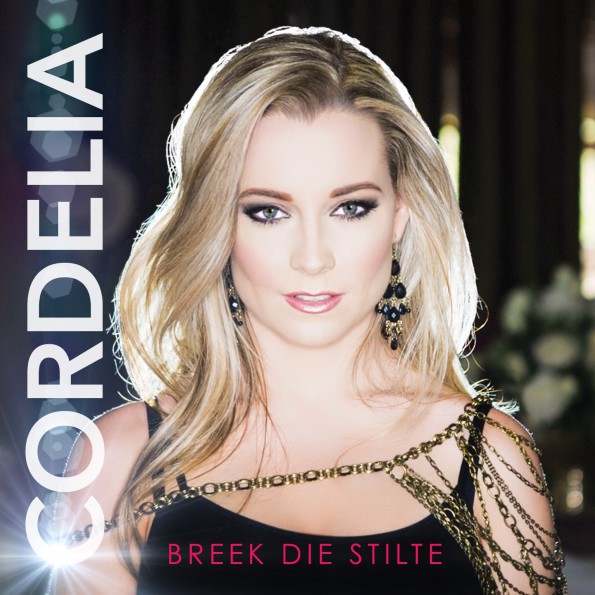 Cordelia also wrote and recorded the theme song of the movie, Hartsbegeertes, named as the Number 1 Spiritual Movie of 2015. Additionally, she recorded and performed Petrol en Vuur, written by Vicky Anne Serfontein, for the kykNET Afri-Visie competition. The singer was also nominated for Finesse magazine’s ‘Feel Good, Do Good Woman of 2015’, where she and 10 other women were honoured for the charitable work they do in their communities.

She will shortly be seen on television in the brand-new kykNET series Sterlopers and also has a role in the movie Gebore Talente.

Cordelia was born in Edenvale and was adopted at the age of six months. She was raised by her adoptive parents in Fochville and matricualted as head girl at Carletonville High School in 2003.

Now, with the release of her new music video, EERSTE WOORDE (FIRST WORDS), Cordelia opens her heart and shares her inspiring story with her fans. The song was written by Rudi Claase, and perfectly captures Cordelia’s heart, emotions and journey to forgiveness.

Cordelia says: “I found my biological mother when I was 26 years old. I often wondered what her first words to me would be… and mine to her… should we ever see each other again. I always had a desire to thank her for giving me life. Sometimes words easily fail us. Especially in those big, special moments that can still take your breath away, leave you stricken or lets your heart skip a beat for what seems like an eternity. To meet my mother after 26 years was definitely one of these moments! I was so nervous when the day finally arrived. My palms were sweaty, my bottom lip quivered, and some of the words in the song capture these feelings perfectly:

Your first words were in my heart

Even though I was confused for many years!

You said one word and nestled deep in my heart!

Your first words are old now

Because in my heartbeat your words are gold.

Your first words to me have been with me for so long.

Because such a tale

I can never lose.

You live deep within me.

“The words of this song sang in my heart at first glance. It is the kind of love only a mother can feel for her child.”

There is nothing to forgive, because you are here now.*

“I chose forgiveness and love and, through my personal experience, I would like others to do the same. I want to make a difference through my love.”

The music video for EERSTE WOORDE was filmed in Pretoria and the surrounding areas of Hartbeespoortdam and has just been released.