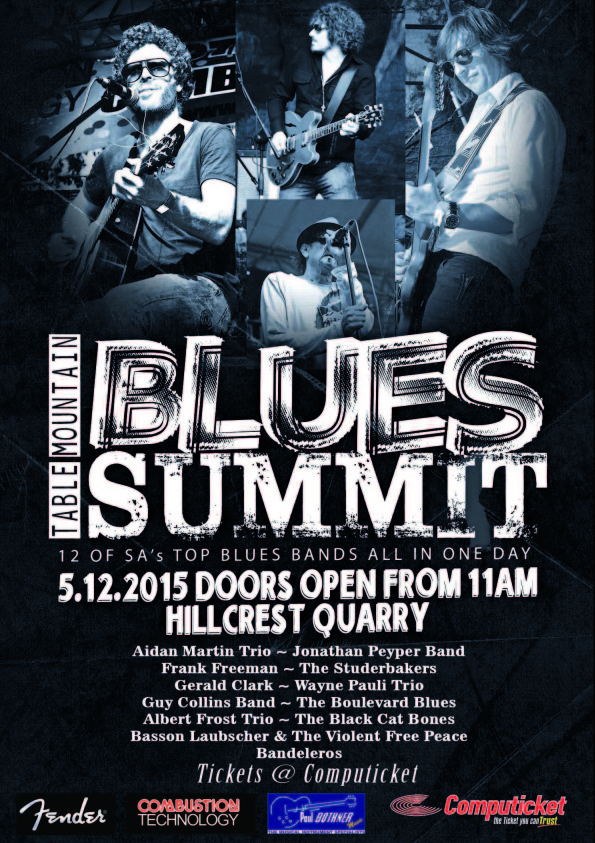 South Africa’s Premier Blues Music Festival returns to Hillcrest Quarry in Durbanville to celebrate its 10th Birthday on Saturday 5 December 2015. Hosting 12 of the country’s top Blues artists, the 2015 concert is proudly presented and brought to you by our sponsors COMBUSTION TECHNOLOGY, PAUL BOTHNER MUSIC and FENDER SA.

TMBS organiser Mike Combrinck says that he thought of the concept of starting a Blues Festival in Cape Town after seeing a Jazz&Blues Session at the late Steak and Ale in Pretoria in 2005. He says: “Good Blues shows were relatively hard to find in South Africa  at the time. So in 2006, the first Table Mountain Blues Summit was held at Tafelberg Tavern in Town, showcasing 6 Blues acts to an audience of just under 450 guests. We gave our hearts and souls and boots to get this going.  In 2007 Richard Pryor came aboard as a partner and we grew this little fesival  into the monster it became (last year had 22 acts). Richard played a big role in the development of the Summit over the past few years, but has now stepped down as one of the organisers, due to other responsibilities. The Summit brought in more Rock and Folk Music over the last few years, but myself and friend Mike Crawford, who has now come on board, (Two Mikes don’t make a wrong) have decided to keep the Summit to its original Blues roots for our 10 Year Birthday Celebration.”

TMBS 2015 will be bringing you 12 of the blues artists that are making serious waves in the industry right. This will be a nonstop 13+ hour blues party of extreme proportions!

Tickets: R195.00 – Bookings at Computicket or can purchase it at Hillcrest Quarry.Free entrance for children under 12 (must present some form of ID)