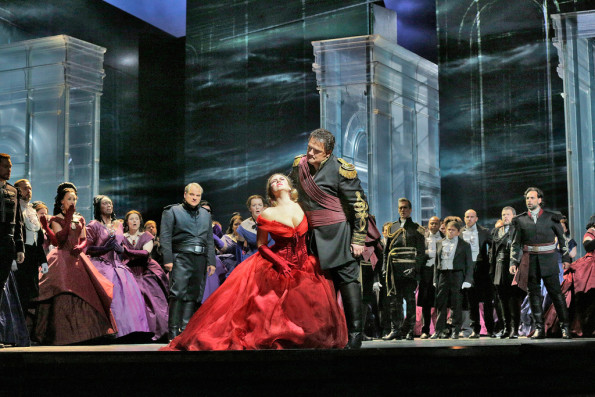 The 2015/16 Live in HD season from The Metropolitan Opera in New York returned to South African screens in October this year. In celebration of ten years of The Met: Live in HD being screened on cinemas around the world, including Cinema Nouveau, the new season presents ten opulent, full-length operas, including six new productions, and a special encore. 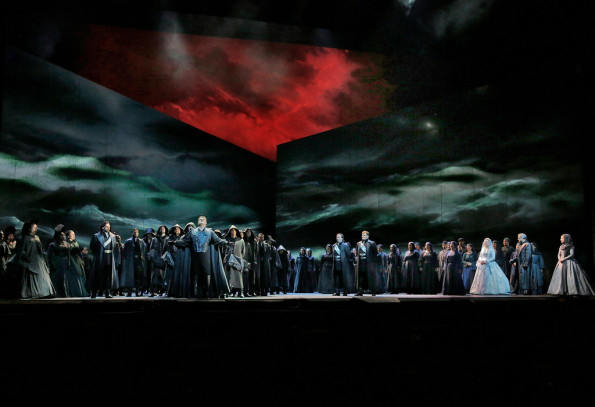 The second opera in the season is a new production of Verdi’s Otello. It releases at Cinema Nouveau and select Ster-Kinekor cinemas on Saturday, 14 November for a limited season. Conducted by Yannick Nézet-Séguin, this is a new staging by Tony Award winner Bartlett Sher of the Verdi masterpiece based on Shakespeare’s tragic drama of jealousy and deceit.

Aleksandrs Antonenko, who has starred as the doomed Otello around the world to acclaim, makes his Met role debut opposite rising Bulgarian soprano Sonya Yoncheva in her first-ever performances of Otello’s innocent wife Desdemona. Željko Lučić adds a new role to his company repertory as the evil Iago, as do Dimitri Pittas as Iago’s pawn Cassio and Günther Groissböck as the Venetian ambassador Lodovico.

Otello had its Met premiere in 1891 and has been performed by the company 325 times. James McCracken has sung the title role a record 59 times at the Met. Notable singers who have starred in the opera at the Met include Plácido Domingo, Giovanni Martinelli, and Jon Vickers as Otello; Montserrat Caballé, Renée Fleming, and Kiri Te Kanawa as Desdemona; and Renato Bruson, Tito Gobbi, and Sherrill Milnes as Iago.

Otello has historically been a popular choice to open the Met season. The 1891-92 season opened with a staging on tour in Chicago starring Jean de Reszke as Otello and Emma Albani as Desdemona, and the opera opened six more Met seasons, most recently in 2004-05. Bartlett Sher’s staging is the eighth production in Met history. It replaces a production by Elijah Moshinsky that premiered in 1994.

The 17 October matinee performance of Otello was filmed for transmission around the world, and will be screened in more than 2 000 movie theatres in 70 countries around the world.

In addition to the production, lovers of opera are invited behind the scenes with the Met’s stars. Singers serve as hosts for the HD series, conducting live interviews with cast and crew members as well as the production teams. They introduce the popular behind-the-scenes features during the intermissions, giving cinema audiences an unprecedented look at what goes into staging an opera at one of the world’s greatest houses. The series has become a global phenomenon with more than 18 million tickets sold since its inception ten years ago.

With these exclusive productions, Cinema Nouveau continues to give local audiences the opportunity to witness these spectacular ‘live’ broadcasts on the big screen, in full digital projection, at various sites across South Africa. Past productions have received critical acclaim and gained recognition around the world.

The Met was the first arts company to experiment as an alternative content provider, starting on a modest scale in 2006. Since then, its programme has grown every season with more than 18 million tickets sold to date, and its tenth anniversary season being celebrated this year.

Met opera stars serve as hosts for each of the Live in HD series, conducting live interviews with cast, crew, and production teams, and introducing the popular behind-the-scenes features. The worldwide HD audience is given an unprecedented look at what goes into the staging of an opera at one of the world’s great houses.

Otello will be screened exclusively at Cinema Nouveau and select Ster-Kinekor theatres countrywide from 14 November, including: Gateway Nouveau and Gateway Commercial in Durban; V&A Waterfront Nouveau in Cape Town; Ster-Kinekor Somerset Mall in Somerset West and Garden Route Mall in George; Rosebank Nouveau and Ster-Kinekor Bedford Centre in Johannesburg; and at Brooklyn Nouveau in Pretoria.

For booking information on The Met: Live in HD season, visit www.cinemanouveau.co.za or www.sterkinekor.com. Download the Ster-Kinekor App on any Nokia, Samsung Android, iPhone or Blackberry smart phone for updates, news and to make bookings. Follow us on Twitter @nouveaubuzz and on Facebook at Cinema Nouveau. For information, call Ticketline on 0861-Movies (668 437).

James Levine conducts Wagner’s early masterpiece in its first return to the Met stage in more than a decade. Today’s leading Wagnerian tenor, South African-born Johan Botha, takes on the daunting title role of the young knight caught between true love and passion. Eva-Maria Westbroek is Elisabeth, adding another Wagner heroine to her Met repertoire after her acclaimed Sieglinde in the “Ring” a few seasons ago. On the heels of his recent triumph in Parsifal, Peter Mattei sings Wolfram, and Michelle DeYoung is the love goddess, Venus.

Acclaimed South African artist and director William Kentridge (The Nose) applies his unique theatrical vision to Berg’s notorious femme fatale who shatters lives, including her own. Musically, the masterful score is in the sure hands of Met Music Director James Levine. Soprano Marlis Petersen has excited audiences around the world with her portrayal of the tour-de-force title role, a wild journey of love, obsession, and death. Susan Graham joins a winning cast, including Daniel Brenna and Johan Reuter.

In celebration of the 10th Anniversary of the Live in HD series, there will be a special encore showing of the first in-theatre event from 2006.  The groundbreaking broadcast that launched the Met’s award-winning Live in HD series to movie theaters, The Magic Flute enchanted opera lovers from around the world with the whimsical humour and breathtaking puppetry of Julie Taymor’s hit production, presented in a shortened English-language version. Under the baton of Maestro James Levine, a winning ensemble cast – including Nathan Gunn, Ying Huang, Matthew Polenzani, Erika Miklósa, and René Pape – brings fresh life to Mozart’s timeless fairy tale.

Bizet’s gorgeous opera of lust and longing set in the Far East returns to the Met stage for the first time in 100 years. Soprano Diana Damrau stars as Leïla, the beautiful Hindu priestess pursued by rival pearl divers competing for her hand. Her suitors are tenor Matthew Polenzani and baritone Mariusz Kwiecien, who sing the lilting duet “Au fond du temple saint,” which opera fans know and adore. Director Penny Woolcock explores the timeless themes of pure love, betrayal, and vengeance in a production that vividly creates an undersea world on the stage of the Met. Conductor Gianandrea Noseda brings his romantic flair to the lush score from the composer of Carmen.

TURANDOT – Puccini  (releases on 20 February 2016)
Nina Stemme stars in the title role of the proud princess of ancient China, whose riddles doom every suitor who seeks her hand. Tenor Marco Berti is Calàf, the brave prince who sings “Nessun dorma” and wins her love. Franco Zeffirelli’s golden production is conducted by Paolo Carignani.

The Met stage ignites when soprano Kristine Opolais and tenor Jonas Kaufmann join forces in Puccini’s obsessive love story. Opolais sings the title role of the country girl who transforms herself into a Parisian temptress, while Kaufmann is the dashing student who desperately woos her. Director Richard Eyre places the action in occupied France in a film noir setting. ‘Desperate passion’ is the phrase Puccini himself used to describe the opera that confirmed his position as the pre-eminent Italian opera composer of his day. Met Principal Conductor Fabio Luisi leads the stirring score.

Soprano Sondra Radvanovsky takes on the extraordinary challenge of singing all three of Donizetti’s Tudor queens in the course of a single season, a rare feat made famous by Beverly Sills—and not attempted on a New York stage since. In this climactic opera of the trilogy, she plays Queen Elizabeth I, forced to sign the death warrant of the nobleman she loves, Roberto Devereux. Tenor Matthew Polenzani is Devereux, and mezzo-soprano Elīna Garanča and baritone Mariusz Kwiecien complete the principal quartet in the bel canto masterpiece, conducted by Donizetti specialist Maurizio Benini. As with the earlier Anna Bolena and Maria Stuarda, the production is by Sir David McVicar, who with this staging completes an enormously ambitious directorial accomplishment.

Director Patrice Chéreau (From the House of the Dead) didn’t live to see his great Elektra production, previously presented in Aix and Milan, make it to the stage of the Met. But his overpowering vision lives on with soprano Nina Stemme—unmatched today in the heroic female roles of Strauss and Wagner—who portrays Elektra’s primal quest for vengeance for the murder of her father, Agamemnon. Legendary mezzo-soprano Waltraud Meier is chilling as Elektra’s fearsome mother, Klytämnestra. Soprano Adrianne Pieczonka and bass-baritone Eric Owens are Elektra’s troubled siblings. Chéreau’s musical collaborator Esa-Pekka Salonen conducts Strauss’s mighty take on Greek myth.

Cinema Nouveau is a division of Ster-Kinekor Theatres (South Africa’s largest cinema exhibitor) and operates 26 digital cinema houses with just under 3 000 seats. The four theatre sites are spread across Johannesburg, Pretoria, Cape Town and Durban. Cinema Nouveau holds the prestige of being one of the world’s only dedicated “art cinema” chains, screening independent, alternative and art cinema content from cultures across the globe. It promises a unique and inspiring cinema experience – a destination for film lovers with a passion for and appreciation of the beauty and artistry of film.

About The Met: Live in HD

The Met: Live in HD, the world’s leading provider of alternative cinema content, is now shown in more than 2 000 theatres in 69 countries, making the Met the only arts institution with an ongoing global art series of this scale. The Met was the first arts company to experiment as an alternative content provider, beginning on a modest scale in 2006. Since then, its programme has grown every season, with more than 18 million tickets sold to date. Met opera stars serve as hosts for the HD series, conducting live interviews with cast, crew, and production teams, and introducing the popular behind-the-scenes features; altogether the worldwide HD audience is given an unprecedented look at what goes into the staging of an opera at one of the world’s great houses.