In an already monumental year for Gary Player, the sporting legend’s charitable tournament of golf and giving, the Gary Player Invitational presented by Coca-Cola, raised a record R6.2 million in donations and during its all-star auction dinner at the South African leg of the series at Sun City this weekend. 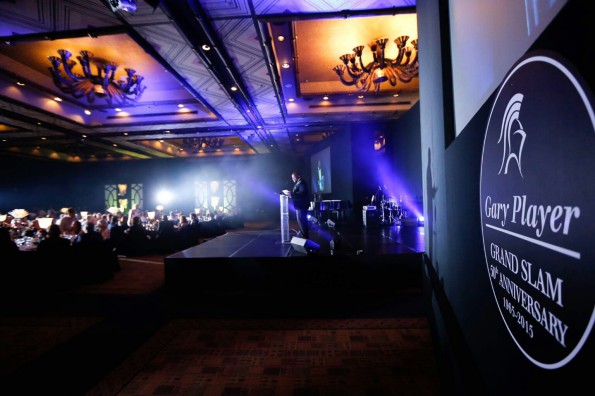 The Gary Player Invitational South Africa, which finds itself in its 16th year as the sport’s premier charity event, has raised more than R800 million across the world in an effort to help sustain the worthy causes supported by The Player Foundation. All proceeds raised from the event will go to charity beneficiaries – Wings and Wishes and the Wildlands in partnership with Qhubeka.

“I am thrilled that once again we managed to raise a significant amount of money for our foundation,” said Gary Player. “The generosity in the room tonight was truly special and it’s a great privilege that such a substantial amount was raised under the umbrella of golf and giving.”

The Gary Player Invitational is frequented by international celebrities, prominent business executives and pro-golfers who gather upon Gary Player designed courses to team up in support of The Player Foundation’s contribution towards the betterment of others. With 2015 bringing Gary Player’s 80th birthday and the 50th anniversary of his career Grand Slam, this year was no exception as guests rubbed shoulders with the likes of Graeme Smith, Aaron Mokoena, Ronan Keating, Carly Booth, Roland Schoeman and Richard Sterne.

Presenting sponsor,  The Coca-Cola Company are extremely proud of the partnership with Black Knight International and the results the tournament achieved over the years. “We are always excited to be involved in this premier charity golf event that celebrates the partnership of influential business and sports leaders to raise funds for beneficiaries supported by The Player Foundation. We recognise that healthy and thriving communities are critical to the sustainable future of our world. Uplifting vulnerable communities with focus on women and children is a shared goal for both The Player Foundation and Coca-Cola.”

The most sought-after auction item of the evening was The Masters fetching R 425 000 with other items on auction such has The Open, Wimbledon, Swarovski crusted Rhino sculpture, The Gary Player Wildlife Collection by David Yarrow, UEFA Euro in Paris 2016 and many more.

“The support we have received from the Gary Player Invitational series truly has made a difference in the world,” said Marc Player, GPI series founder and CEO of Black Knight International. “From the professional golfers and celebrities to our sponsors, they make it all possible to change people’s lives.”