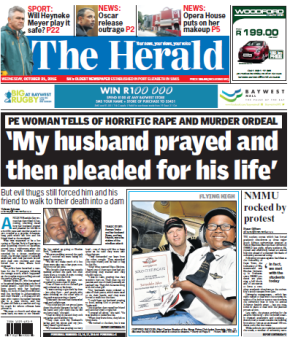 The Garden Route has had another great feature added to an already impressive list with its very own edition of The Herald.

The Herald, South Africa’s oldest and one of its best dailies, is now a growing presence in its sister region, the Southern Cape, with which it has so many close ties.

The Herald‘s Garden Route edition will bring you full coverage of not only the hard news and pressing issues of the day in the region, but also all the colour and flavour of one of South Africa’s most fascinating areas.

And if you would like to be part of the team and write or take pictures for our Garden Route edition, contact our news desk on (041)504-7324 or e-mail danielsa@timesmedia.co.za or kimberleym@timesmedia.co.za.