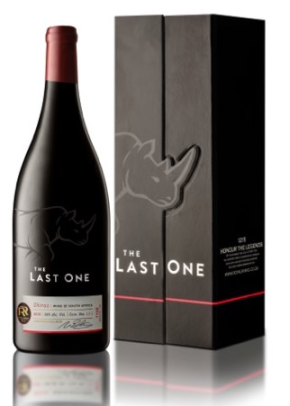 Van Loveren has extended its contribution to nature conservation in South Africa with the launch of The Last One Shiraz 2013, which forms part of the Rhino Run range. What makes this Shiraz extra special is that only 1 215 bottles selling for R1 215 per bottle will be released. The significance of this number represents the total number of rhino poached in 2014.

This limited edition wine is hand bottled, waxed and labelled, featuring the signature of cellar master, Bussell Retief, on the label, reaffirming Van Loveren’s support to combat rhino poaching. The perfect collector’s item the wine is beautifully presented in a rhino inspired box.

Produced from hand-selected grapes from a single vineyard, Bussell describes this premium quality, full-bodied wine as displaying light peppery aromas of ripe berries, perfume and spice. The wine will reach its full maturation potential in the next three to five years.

“The plight of the rhino has been well-publicised and continues to grow direr every passing day,” says Van Loveren Vineyards CEO Phillip Retief. “It has mobilised millions of people across the globe to help fight the scourge of poaching.

Launched under the banner of Honour the Legends, the Rhino Run range serves not only to highlight the poaching crisis, but will also make a contribution to a number of organizations who support rhino conservation, with every bottle sold. The wines will be available for export and at international wine shows and exhibitions, thereby creating further awareness the world over.

A decade ago the story of successful conservation efforts that brought both black and white rhino species back from the brink of extinction, seemed to be heading for a happy ending. Since 2008 however, an alarming and heart-breaking upswing in poaching has pitched the animals back into a struggle for survival, with almost 4 000 poached for their horns.

The Last One can be purchased directly off the farm or from select retail outlets nationwide.