In 1901, while the Anglo Boer War rages in South Africa, Boer warrior Willem Morkel’s (Stian Bam) wife and only child are murdered by British soldiers. Willem is taken captive and banned to the island of St. Helena where other Boers are also held as prisoners of war. 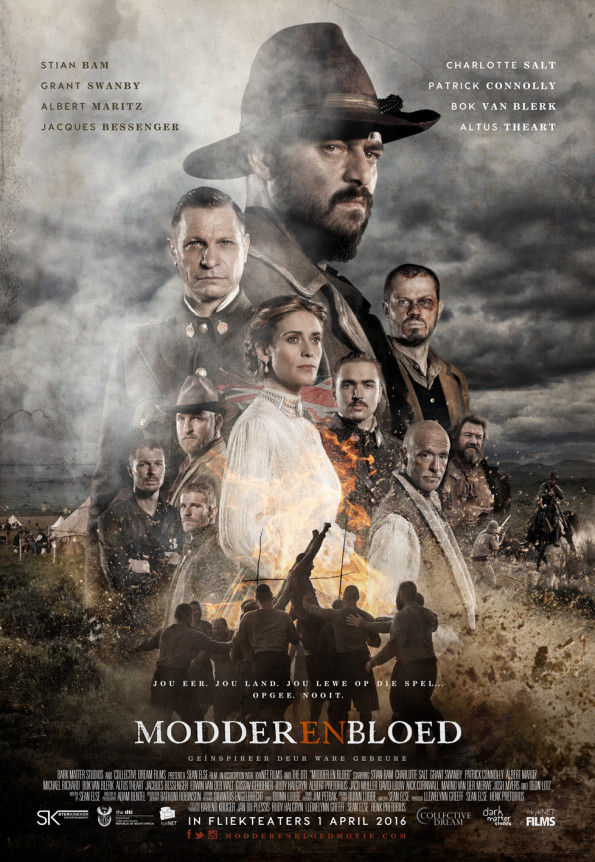 There is no mercy for them and under terrible conditions; every day becomes a battle for survival. But this encourages camaraderie among the men, and they become like family.

Colonel Swannell (Grant Swanby) is in control of the concentration camp and he has such a deep-seated hate for the Afrikaner that he makes their existence as difficult as possible. Then Willem accepts a challenge, which will lead to the most important battle of the Boers’ lives…

“Willem is a big role, iconic in nature. Thus, Modder and Bloed is also epic in scale and range; that much was evident after I’d read the script once. It’s very seldom that one gets the opportunity to play a role like this and to be part of a film like this. So I had no doubt when Sean asked me to play the role of Willem. Also, I really wanted to work with Sean and I am grateful for the opportunity. I have immense respect for him. His work ethic is unsurpassed and he is eminently an ‘actor-director’. And the way he in which he works with people is unbelievable.” – Stian Bam

“It was an incredible privilege to work with the international actors. Charlotte is very selfless en the most giving actress. Initially, I was very nervous to act with her, but she is so comfortable that one of my favourite scenes in the movie is with her. And then Patrick… What a wonderful person and actor. I wouldn’t have been able to create and follow through with Willem without Patrick. He was definitely my safety net.” – Stian Bam

“Katherine Sterndale is loosely based on the historical figure of Emily Hobhouse, so it was really interesting to kind of delve into that and it was wonderful to play such a strong woman and to play a suffragette, and someone who is full of humanity and just sees the cruelty that is happening and really wants to do something about that. And as a woman, in that time, that’s not always the easiest thing. So it was exciting to play such a strong character, who is not just the love interest, the girl on the guy’s arm. It’s not a love story, it is a story of courage, and finding your voice and figuring out what you believe in.” – Charlotte Salt

Sean Else, writer, director and producer, says the making of the film was a wonderful experience that brought a fantastic team of people from across the world, in front of and behind the camera, closer to one another and to the project as they faced each challenge together.

Modder en Bloed is produced by Dark Matter Studios (Llewelynn Greeff and Henk Pretorius – Leading Lady) and Collective Dream Films (Sean Else – Platteland). It will be released countrywide by Ster-Kinekor Entertainment on 1 April 2016.

The film is released in cooperation with kykNET Films and the Department of Trade and Industry.