Triple SA crowns are beckoning for the SA golfer

The view must be pretty good looking down from the crest of a wave. And if anyone deserves this coveted spot, it’s South African golf’s golden girl Lee-Anne Pace who continues to impress wherever she plays. 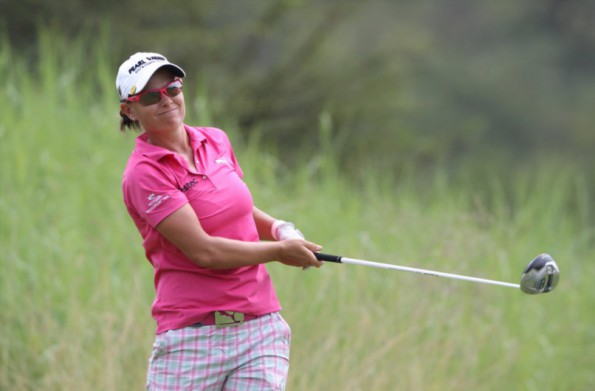 The 34-year-old is coming off a memorable victory at the SA Women’s Open held at San Lameer three weeks ago. After winning by three shots, Pace became part of very elite company, joining the likes of American Brenda Lunsford and local Barbara Pestana as back-to-back winners. And even though she may be taking it easy as she looks forward to spending Christmas with her family in Paarl before heading out to Mossel Bay for a bit of stand-up paddling, the thought of three on the trot isn’t too far away.

“I just love statistics and setting records, so this is really, really cool,” said Pace, minutes after her victory. “I’m definitely going for the hat-trick next year. That would be an awesome record to own.”

The win sets her up nicely in what will be a busy few months as the Investec Cup takes centre stage until the grand finale in March. For someone who has done so much for South African women’s golf for over a decade, the women’s champion is thrilled to be caught in the midst of an explosion that has seen the sport go from strength to strength.

Just days before triumphing at San Lameer, it was announced that the total prize money over eight tournaments amounts to R2.5 million, which includes a R1 million bonus pool for the season-ending event at Millvale from March 10 to 12.

“I feel so privileged to be a part of it and it’s so exciting to see the growth and development of the Ladies Sunshine Tour (LST),” says Pace.

“The LST has really helped to develop women’s golf in SA starting from the amateurs who compete alongside the pros allowing them to be ready sooner for the worldwide tours.

“The results are showing on the home front and overseas with more and more girls gaining their cards on various tours.”

Much like her bubbly demeanour, Lee-Anne has had spurts of rich form and when in the swing of things, nothing can stop her. After a successful amateur career in the States, she graduated from the University of Tulsa with a bachelors degree in psychology. It is this combination of sport and study which Lee-Anne cherishes and something she believes all young golfers wanting to break through, should consider.

“It was one of the best experiences of my life and it comes highly recommended. It gave me reassurance and a degree to fall back on.

“It also taught me teamwork, discipline and social skills.”

Not that her golf was suffering. During the four years, she won seven events and was selected for the All-American team which is basically the top-20 of all college players in the US. Having turned professional in 2005, she joined the Futures Tour in 2006 before qualifying for the LPGA Tour in 2007.

She lost her card at the end of the year. But if anything, this only sparked what has been a wonderful career so far. The year 2010 especially stands out which included five Ladies European Tour (LET) wins taking her to the top of the Order of Merit as well as LET Player of the Year.

Then 2012 went by, but only to make way for an exceptional 2013 which was another stellar season for the Pearl Valley golfer, bagging three more LET titles and her second Player-of-the-Year accolade.

Asked which victory she holds most dear, Lee-Anne pinpoints her 2013 SA Open win. “I won from quite far behind and it was very exciting towards the end.

“To be able to be the South African Open champion in front of so many supporters and also my family was just such an honour and an amazing feeling.”

As for golfing blood in the family, her dad can more than help himself on the golf course, much to Lee-Anne’s amusement.

“He was a three handicap once upon a time and now claims to be an 18 … erm, I don’t think so!” She also used to caddy for him on weekends for extra pocket money and ,more importantly, learnt how to read greens from an early age.

“Hey, R20 back in the day paid for a movie and popcorn,” chuckles LeeAnne. Before tackling the Sunshine Tour early next month, the world No 52 is enjoying some time off and has put a Bluetooth keyboard on the top of her Christmas wish list.

Until then, she’s trading electronics for her paddle board, no doubt enjoying the ride as South Africa’s leading women’s golfer.