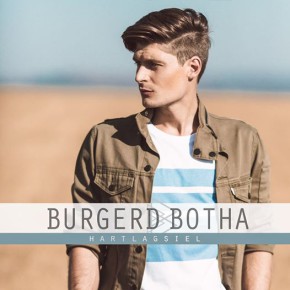 Burgerd, who was part of the award-winning group Romanz for seven years – has been hard at work on his first solo album.  “Singing has always been my biggest love and an integral part of my life,” says Burgerd who regularly performs at local music concerts and festivals. He has also appeared on the international stage with world-renowned performers.

In 2012, he travelled to London with the South African Olympic team and performed for them at South Africa House; and in 2011 he sang at Prince Albert and Princess Charlene of Monaco’s wedding ceremony with international stars such as Umberto Tozzi and Andrea Bocelli.   In South Africa, Burgerd is a regular at concerts such as Huisgenoot Skouspel, Skouspel Plus, Gospel Skouspel and festivals across the country. “I am grateful and privileged to have a singing career and still go for weekly lessons at Mauri Mostert, my mentor and vocal trainer,” he says.

Burgerd was born in Klerksdorp on 27 November 1986 as the son of musical parents. He started participating in eisteddfods and concerts from a young age – and in grade 9, he was a member of the Jacaranda Children’s Choir’s who competed at the Tuscany Choir Festival in Italy.  In grade 10, he was a member of the University of Pretoria’s Youth Choir; and in his grade 11 year, Burgerd reached a milestone in his cultural school career when he played the main role in the successful musical theatre piece, The King and I, presented by Brits High School.  In 2005, during his last year of school, Burgerd was a head leader and after that he started his studies at the South African Music Institute for three years, with guitar as main instrument and piano as second instrument. Shortly after completing his studies, he began his professional musical career as a member of the musical quartet, Romanz.

Apart from his love for singing and music, Burgerd is an adventurer who enjoys horse riding shooting, and the great outdoors as well as spending time with his loved ones. “I always make time for my parents and huge family, and I enjoy making music around the campfire or just for fun; family holidays are my best,” he says.

However, he is very excited about the new chapter in his life and fresh start in his career. “I can’t wait to enter the music world as a soloist.”