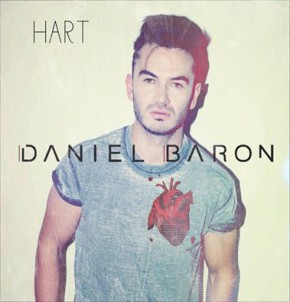 Undoubtedly a ground-breaking move in his career, Baron describes HART as “a meaningful ballad about a long distance relationship and how true love will never fade no matter how far apart you are from the one you love.”

While the multi-chart-topping singer and songwriter treads into new territory with his first Afrikaans single, Baron’s distinctive sound, unmistakeable voice and profound lyrics are bound to give listeners goosebumps.

“I’m a huge fan of Afrikaans music and although I am an English artist, I have always wanted to write and produce my own Afrikaans song.”

Daniel Baron is one of the most popular South African singers both locally and internationally, especially in America and Britain. His hit song, Indestructible from his latest album Apollo, released to critical acclaim last year.

Shortly after his triumph with Indestructible, Baron achieved more success with the song Say What You Want that he recorded with the always-popular Afrikaans pop group ADAM (Hugo Ludik, Kyle Grant and Reynardt Hugo).  This song forms part of the EP Young and Wild that released towards the end of 2015 and was also included as part of the soundtrack for the film, Vir Altyd, screening nationwide in South Africa from 12 February 2016.

This single was released in South Africa, Holland, Belgium and Luxembourg on 6 June 2015 and achieved instant success – within a few hours after its release it reached the number 13 spot on the iTunes Coca Cola Top 40.

Despite several other nominations, Baron has won a Wawela Award for Best Male Artist and Songwriter and was nominated as Best Songwriter and Artist for Best Soundtrack of a Feature Movie or Theatrical Documentary for the movie Stuck.

Now, as he enters the Afrikaans market, everyone’s looking forward to the new heights he’ll achieve.

Baron concludes: “For a while my fans have also been challenging me to record an Afrikaans song, and I am so excited to finally release it!”