Defending champion Branden Grace has said he will target victory at this week’s Commercial Bank Qatar Masters, beginning tomorrow, while also admitting that the odds are against him of becoming the first player to retain his title at the Doha Golf Club. 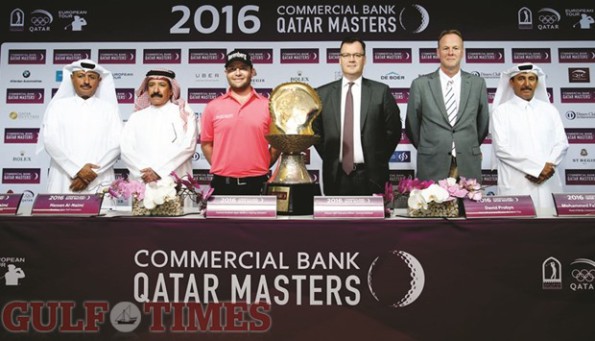 Major winners Adam Scott (2002, 2008) and Paul Lawrie (1999, 2012) are the event’s only two-time winners, but no player has won back-to-back titles in Doha, unlike at The European Tour’s three other events in the Middle East.

The Commercial Bank Qatar Masters sits at the heart of the circuit’s three-stop ‘desert swing’ early in the year and Grace, 27, is well acclimatised after competing in Abu Dhabi, where he tied for fifth on Sunday for his fifth straight top-10 finish on The European Tour.

“I will certainly target victory this week and get myself in a winning mindset. I often play videos of past victories to help with this and I’ll do that again,” Grace said.

“However, the reality is that the chances are slim, especially when you look at the field. So many top players like Sergio (Garcia) have won here and return year after year. Then we have Louis (Oosthuizen) coming back here and a lot of other players in really good form, so we’ll just do our best and see what happens.”

The South African has enjoyed a spectacular run of form since late 2014, becoming a regular contender at the world’s biggest events.

Last year, after winning in Doha in January, he finished joint fourth at the US Open in June and third at the US PGA Championship in August, while in October he won all of five of his matches for the Internationals against the USA at the Presidents Cup in Korea.

“I’m really happy with my game in terms of consistency and also in terms of competing at the biggest tournaments of all,” Grace said. “I want to continue this momentum and keep improving.”

“The 2015 season was probably my best so far, and it all started after my win here in Doha. I feel good about my form at the moment, and I also feel that I return here this year as a much better player than I was last year.

“The DGC is both a tough and unique course, and can be unforgiving if you make mistakes. Wind is also a factor, and I hope it’s a bit less windy this time,” added the South African.

Hassan al-Nuaimi, President of the Qatar Golf Association, welcomed the defending champion back to Doha at yesterday’s pre-tournament press conference.

“Branden Grace was a very worthy winner of the Qatar Masters and we’re delighted to see how that victory spurred a sensational year for him in 2015. He seems to be continuing that form this year, so I expect him to be among the contenders for the Mother of Pearl Trophy this week,” al-Nuaimi said.

“We’re also proud to welcome back two of our leading Qatari players, Saleh al-Kaabi and Ali al-Shahrani, and the winner of this month’s Qatar Open, Rayhan Thomas.”

A regular stop for the world’s top players, the US$2.5 million tournament has grown into one of The European Tour’s leading events, boosted by Commercial Bank’s continued title sponsorship from 2006.

Colin Macdonald, Deputy Chief Executive Officer, Commercial Bank, said: “Our support of the Commercial Bank Qatar Masters has helped it grow into a world-class annual spectacle that
has put the country on the global sporting map.

“As well as featuring a wide range of family-friendly entertainment, the tournament has become a focal point for the growth of golf in the country and an inspiration to Qataris, which is vitally important as Commercial Bank is dedicated to supporting the local community.”

David Probyn, Tournament Director, The European Tour, said Commercial Bank’s long-term title sponsorship had ensured the tournament remained a fixture on the calendar and an essential part of the circuit’s strong start to every season.

“The Qatar Masters has grown hugely in status with Commercial Bank’s fantastic support over the past decade,” Probyn said.

“The European Tour is now entering a second decade of working closely with Commercial Bank to develop the tournament, which is one of the circuit’s long-standing events and a regular stop for many of our top players.”

Since 1998 the prestigious Qatar Masters golf tournament has been hosted by the Doha Golf Club, which boasts of a unique and challenging desert-type course, which has proven to be one of the longest par-72 courses on the tour.

Designed by Peter Harradine and unveiled in 1997, the 7,374-yard Championship Course features eight strategically positioned lakes, 65 giant cacti, numerous imposing limestone rock formations and an abundance of lush and lengthy green fairways, presenting a startling contrast to the desert that lies beyond.