Louis Oosthuizen relished the windy conditions at Doha Golf Club as he took a share of the first-round lead at the Commercial Bank Qatar Masters. 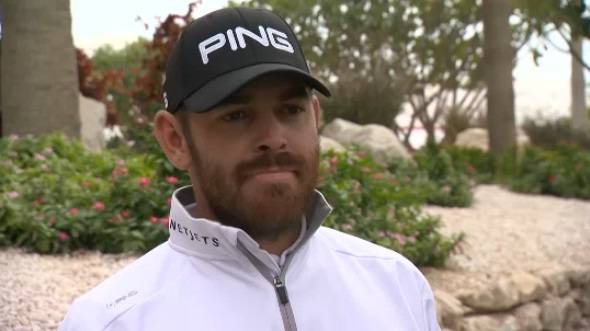 The 33-year-old revealed in the build-up to this week that he got used to tackling the wind honing his game in his native South Africa, and he has taken that into his professional career, notably with his win at the 2010 Open Championship.

The layout in Doha is known to be a trap for the wind and while the breeze was not as strong as many expected on Wednesday, it still required negotiating by the field.

Oosthuizen and Pablo Larrazábal proved to be the two men best at handling the conditions, both firing opening rounds of seven under par 65, one better than Björn Åkesson, Nicolas Colsaerts and Andrew Johnston.

“I like windy conditions,” said Oosthuizen. “If it gets really strong, then it gets difficult.

I think patience is the big thing when it really blows hard. But today was just a good wind, and a lot of flighted shots, which I like – Louis Oosthuizen

“There are a lot of cross-wind shots, where you’re not sure if it’s in or a little down, so you need to have that wind map out and handy.”

Oosthuizen is renowned as a fast starter, having won his first event of the calendar year in four of the last five seasons, and knows his way around Doha Golf Club having finished second here in 2009.

The seven-time European Tour winner has not played since the Nedbank Golf Challenge in early December and feels that rest and recuperation are key factors in his form after the festive break.

“It’s the only time I can have proper time away from golf, six to eight weeks, and not really touching a golf club,” he said. “Just having a good break and a good holiday, and it looks like I need to do that more.”

Oosthuizen began his round on the tenth hole and opened birdie-birdie before picking up further shots on the 16th and 18th to turn in 32. Further gains followed on the first and sixth and when he put his approach on the ninth inside three feet, he tapped in for a seventh birdie of the day.

“Bogey-free is always good,” he said. “There were two occasions where I looked like I was going to make bogeys but recovered well, and the rest was just pretty solid.

“It was good ball-striking today, and I made one or two putts.”

There were no bogeys on Larrazábal’s card either as the Spaniard looks for a second triumph in the Gulf states following his 2014 victory at the Abu Dhabi HSBC Golf Championship.

Larrazábal also started with two birdies and, after a run of five straight pars, made two more on the eighth and ninth to turn in 32. He made it three in a row on the tenth and further birdies on the 12th and 16th ensured he enjoyed a successful start.

I’m very happy, I hit it very well tee-to-green, 17 greens in regulation which with these conditions is very good – Pablo Larrazábal

“I gave myself a lot of birdie chances and that was key. To always have a birdie putt is key in these conditions because you know with these kinds of greens, you’re not going to hole too many, but I holed seven, so it was very good.

Big-hitting Belgian Colsaerts joined Oosthuizen in taking advantage of all of the par fives in a 66.

Colsaerts, one of the heroes of Europe’s victory at The Ryder Cup in 2012, endured an indifferent season by his lofty standards in 2015, finishing 97th in The Race to Dubai.

But he added to his birdies on the par fives with further gains on the sixth and 14th to get to six under.

Englishman Johnston, who was the top player on the Challenge Tour in 2014, birdied the tenth but gave the shot back on the 13th before gains on the 16th and 18th. He then came back in 32, with birdies on the third, fifth, seventh and ninth firing him up the leaderboard.

Åkesson had looked set to take at least a share of the lead after flying out of the blocks with birdies on the tenth, 11th, 12th, 13th, 16th and 18th to turn in 30. The Swede picked up another shot on the second and missed chances to get out in front on his own before a bogey on the eighth dropped him back to six under.

Two-time champion Paul Lawrie was in a group of eight players at five under and looking to become the first man to win the event three times.

Rafa Cabrera-Bello has won in this part of the world before at the Omega Dubai Desert Classic in 2012 and he came home in 31, while George Coetzee took his aggregate score here over the last four years to 47 under as he continues his comeback from an ankle injury.