Branden Grace made history as the first player to successfully defend his title at the Qatar Masters on Saturday, but the real prize was breaking into the top 10 in the world. 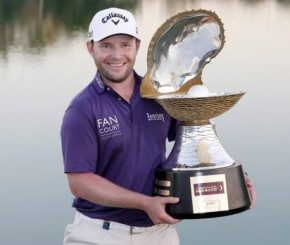 The seven-time European Tour winner rose above a jam-packed leaderboard with a final round of 69 that put him on 14 under par for the week, two shots clear of his nearest rival.

Windy and cold conditions made the final round a serious ordeal, yet Grace kept calm and overcame the elements, making only one drop during his final 18 holes.

For the third day in a row, Grace birdied his first hole out, but was unable to continue scoring and made a run of pars until carding his first (and only) bogey of the day at the fifth. He immediately recovered the shot with a birdie at the sixth hole and continued to stick with his plan, which paid dividends.

Compleat Golfer’s new Playing Editor Louis Oosthuizen hung tough in the blustery conditions and carded 71 to share seventh place. He was joined by fellow South African George Coetzee, who seems to be back after a broken ankle sidelined him for most of 2015.