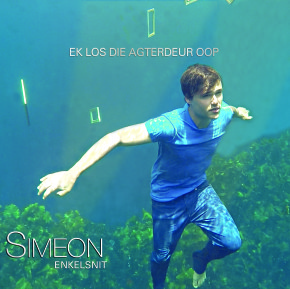 “Ek los die agterdeur oop is the refrain of my new single. I think a lot of people will be able to identify with the images that the lyrics call to mind. When relationships don’t work or when you lose a loved one, one has to process a lot of emotions. And once you start processing all of those emotions, in search of the old – and perhaps more happier versions of yourself – you discover that you can look life in the eyes again and appreciate it. EK LOS DIE AGTERDEUR OOP is now part of my collection of songs and is something that I also wrote for myself – not only my supporters. I hope people will be able to identify with the song,” says Simeon.

In 2012, after Simeon completed his studies at the South African Music Institute, his debut album, Rooirok, was released – and featured two singles that was written for Angus Buchan’s film Ordinary People.   The album also includes two duets, of which the one was recorded with his mother, well-known singer Sonja Herholdt.

In 2013, he recorded the single Just Walk Away with Jack Parow and this song reached the Top 40 on several radio stations countrywide.

After that, his single My Alles Jy was released in October 2014 and reached the number one spot on a variety of radio stations.

Simeon’s unique voice is often combined with songs he writes himself that are accompanied by the guitar, for example songs like Stupid Little Song and Jy Lyk Goed In My Hemp.

This young singer has appeared on several TV programmes like Jukebox, SABC Morning Live, ETV Sunrise, Jou Show met Emo Adams and Ontbytsake and apart from several newspaper and magazine articles, he’s been on the covers of the magazines Lig and Kos vir die Siel.

He also has a corporate band, The Cover Ups, which performs a combination of swing, folk and Top 40 songs and can be seen weekly at Katzys and 360 Degrees in Johannesburg.  The band released its debut album The Cover Ups in June 2014.

With his boy-next-door looks, sparkling personality and unbelievable musical abilities, the future shines bright for this singer who finds inspiration for song writing from a combination of life experience and a love for telling stories in music.